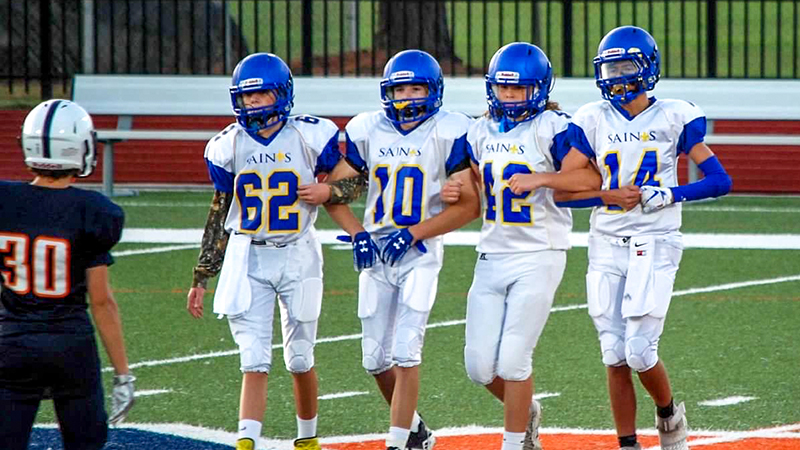 The Nansemond-Suffolk Academy JJV football team had a perfect season, going 7-0 this year.

Having an undefeated year in any sport at any level is a difficult task. The Saints were able to accomplish that this season, having a perfect season on the gridiron, with almost all of it in dominating fashion.

NSA averaged 43 points per game and allowed only nine points per game, surrendering only three touchdowns the whole year. Their only two shutouts on the year came against their rivals Norfolk Academy and Isle of Wight, which came with some special incentives.

JJV Coach Brian Atwood promised his team he’d shave his head if his team was able to come away with two shutouts of their rivals — and the team shaved his head right after the game.

NSA’s high-powered offense started with the duo in the backfield at running back and quarterback. Running back Noah Delk finished the season with 869 yards and 17 touchdowns, with quarterback Jackson Runyon passing for 789 yards and tossing 14 touchdowns to go along with two rushing touchdowns. The two shared Co-Offensive Player of the Year honors.

The team MVP was Preston Groves, who finished with 579 yards receiving and 10 touchdowns to go along with 279 yards rushing and two touchdowns. On the defensive end, Groves averaged 15 tackles a game and finished the season with three interceptions and two fumbles recovered. Most of the top production from the team came from the leaders.

“In my opinion, the season would not have been as successful if it was not for our four team captains, Cole Atwood, Cooper Goss, Preston Groves and Jackson Runyon,” Atwood said.  “These four young men not only lead on the playing field but in the classroom and in the community, and I’m so proud of these four young men for their commitment and dedication to the team and the school.”

Not only was the Saints’ talent evident to other teams and coaches, but their intangibles were too. Many of the opposing coaches complimented the Saints on how well-coached they were, as well as their sportsmanship and discipline. Coaches even told the Saints that they see another state title from the group in the future. One thing is for sure — the future of NSA football is bright.