‘The best job I could have ever asked for’ 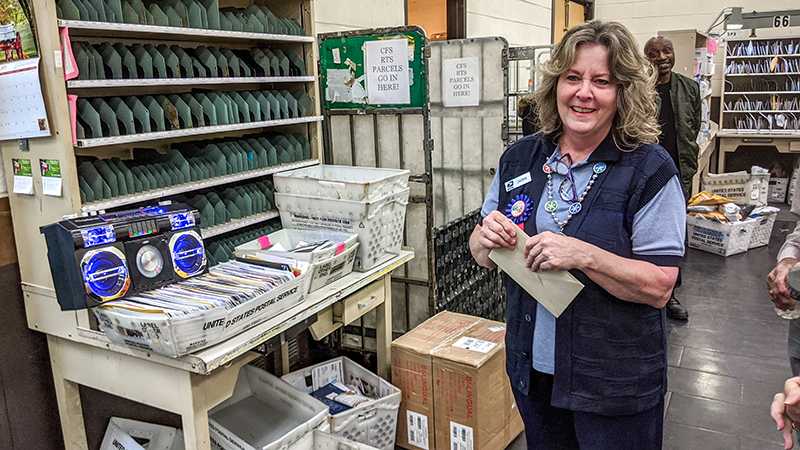 Jackie Knight worked for 42 years with the U.S. Postal Service in Suffolk, including 24 years at the post office in Chuckatuck and the last five or so years at the Driver Station post office at 4897 Bennetts Pasture Road before retiring Friday.

Carrying on a legacy started by her brother and mother, Jackie Knight began working for the U.S. Postal Service 42 years ago in Suffolk.

She has worked at many locations throughout the city, including 24 years in Chuckatuck, and for the last five or so years has made the Driver Station post office on Bennetts Pasture Road her home away from home.

On Friday, she reported to work for the last time, as her fellow co-workers threw her a retirement party to commemorate her longevity and pay tribute not just to someone they work with but someone who has become a dear friend.

“When the younger ones found out I had 42 years, they went, ‘Oh my God, I’m not even that old yet,’” Knight said, laughing.

In the week leading up to her retirement, Knight spent a lot of time reminiscing about the old days, sharing hugs, laughs, a few tears and a lot of stories.

“When I first was hired, we had bigger parcels and everything was done manually,” Knight said. “You used an adding machine for everything, or you used your head. Now, everything is technology.”

Knight, whose official title was lead sales and services associate but who in reality did a lot of everything at the post office, said she has had some physical issues with her knees and ankles over the last year that made the demanding postal service work a little more challenging. Those things accelerated her plans to retire, but still, the last day was bittersweet.

On the one hand, she is looking forward to retirement and not having to get up at odd hours and miss time with her family. “Free at last,” she said with a laugh.

“It’s exciting, and it’s a little of everything,” Knight said. “It’s anxiety, it’s excitement, it’s — I’m sad. I’m going to miss my customers. And then this morning I drove in, I was like, ‘Oh no, this is really going to be the last day that I come this way, and I’ve had the same schedule for 42 years. It just doesn’t seem possible.”

Letter carrier and safety ambassador Freddie Manning pulled out a boom box and played the opening bars to the Whitney Houston classic, “I Will Always Love You,” bringing tears to Knight’s eyes.

“You’re working so hard, you can’t tell it’s your last day,” Manning said to Knight as the song played.

“I love you,” one of her colleagues shouted above the song.

One by one, her co-workers — her friends — gave her hugs, shared thoughts and vowed to stay in touch. They left her gifts, and each one left her a handwritten note in a handmade Driver Station post box.

Knight got her start working for the postal service in the 1970s. Her brother worked Christmas help at the main post office — then and now located at 445 N. Main St. — and then he left there and got a full time job in Hampton. After she graduated Suffolk High School in 1972, she put in papers to take the postal service exam in Richmond, Norfolk and Suffolk.

“Definitely, I couldn’t ask for any better job than what I’ve had,” Knight said. “I love my customers. That’s is what’s probably kept me the longest.”

She could have chosen any of the three cities to work, but with children, she wanted to stay close to home in Suffolk. She said she was one of the first females to work in the post office, starting at the main office in 1977.

“I ended up in Suffolk as one of the first females — most of the guys were veterans,” Knight said. “It was an adjustment for everybody, because the males weren’t used to the females working, and the laws and everything have changed. It was hard work, though. It was really hard work.”

Amid many technological changes, Knight grew in the job and advanced, working in eight different post offices in the city, including 24 years in Chuckatuck before going to Driver.

“We were all one big happy family,” Knight said. “It’s more of the same here. You know people and you’re attached to them.”

Even on her last day, she was still there early, setting up her window and pitching in with parcels, unloading trucks, stamp stock or whatever else. It hasn’t been easy work, but it has been rewarding.

“You put yourself wherever you need to be to get the job done,” Knight said.

Manning said her spirit will be missed at Driver Station.

“She’s been outstanding, she’s been incredible, she’s still fully motivated every day,” Manning said. “She’s got a positive attitude. She continues to help people, she smiles. We’re going to miss her so much.”

Rural carrier Crystal Yeatts described Knight’s beautiful personality that has shined bright in the post office. She said she cried knowing that Knight is retiring.

“She does a lot of work around here, so whoever is going to fill her shoes has got a lot to fill, and we’ll be able to tell,” Yeatts said. “She’s pleasant, she’s sweet. Everyone loves her. When we have bad days, she’ll hug you and tell you it’ll be all right, and she’s just always positive. … I do hope that whoever gets her spot has a good spirit, because she definitely is one of a kind.”

Knight expects to enjoy retirement, and she vows to stay in touch with her co-workers.

As they drifted back to work, or out the door, she worked her way around and hugged everyone, sharing more laughs, smiles and memories. She still had a few hours left on her last shift, and was buoyed by the warmth from those friends as she headed up to the front counter to help customers as they filtered into the post office. After saying her last goodbyes as a colleague, Knight expected to take a long time Friday evening trying to get to sleep.

To stay for 42 years, you have to love the job, and the people, she said, adding, “It’s the best job I could have ever asked for.”