Maury too much for NR in loss 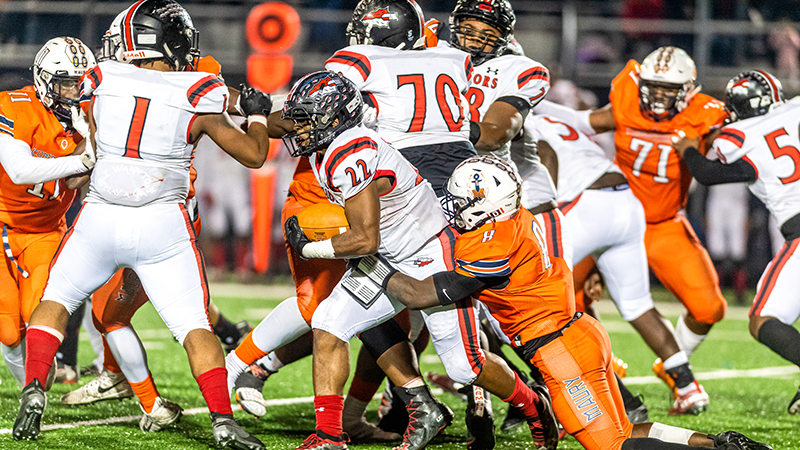 X’zavion Evans tries to get up field for the Warriors. Nansemond River High School took a tough loss to Maury High School in the regional semifinals. (Sarah Murphy Photo)

The Warriors’ season came to an end at Powhatan Stadium when the Warriors matched up with the Commodores. Nansemond River came into the game as the No. 6 seed and had upset the No. 3 seed just the week prior. However, Maury seemed to be too much for Nansemond River.

With the offensive capability Maury has, it was important for Nansemond River to make sure they kept pace on that end. Nansemond River Coach Justin Conyers has always preached playing mistake-free football against great teams. However, turnovers proved to be the deciding factor for the Warriors in the loss. They opened the game with a fumble that Maury scooped and scored for a touchdown.

Nansemond River was able to answer with a 28-yard score from Elijah Askew, taking an 8-7 lead, which went on to be the Warriors’ only lead and score of the game.

Nansemond River had four fumbles on the day, with most coming in most critical spots in the red zone.

The Warriors finished the season with a 9-2 record. The team has taken a step forward in each of Conyers’ first two seasons as the head coach. Nansemond River also had a high-powered Wing-T offense they implemented in late 2017 and was coordinated by former Nansemond-Suffolk Academy coach Lew Johnston this season. It churned out an average of more than 300 rushing yards a game for the Warriors and produced two 1,000-yard rushers in X’zavion Evans and Brent Stratton.

Conyers feels good about the team they have coming back for next season.

“As a coaching staff, we have already started focusing on next season,” Conyers said. “It starts with us. We have a good group coming back, and we feel like we will be really good next year.”