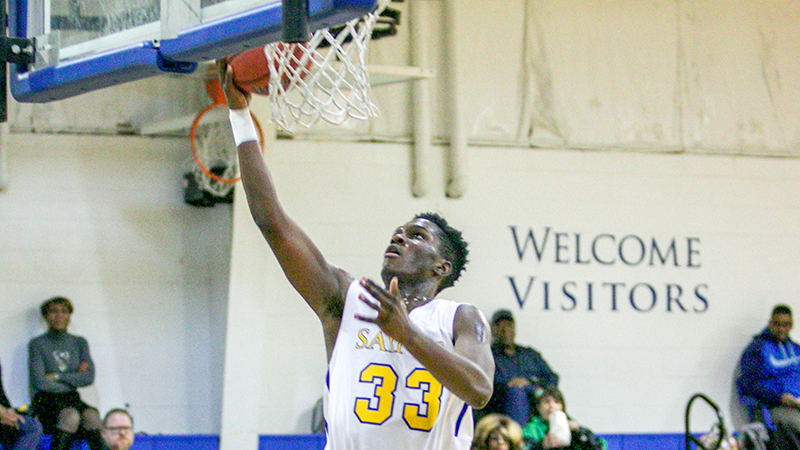 Kemauri Spencer makes a play for the Saints. The Saints return four of five starters on the court this year. (Jeffrey Dailey Photo)

The Saints boys’ basketball team will have some stability heading into this season. Fuhrmann returns for his second year with the group, which will make for some stability. Because of that, NSA is excited about the things they can accomplish this season.

“We are feeling really good,” Fuhrmann said. “We have been doing a good job working on making plays and swinging the ball. We are definitely excited to get things going. The fact they’ve seen the same face for back-to-back years has made the guys more comfortable. We have just been trying to build off of last season.”

A lot of the Saints basketball team plays football, and with NSA not making the playoffs on the gridiron this season, it gave NSA a chance to get going earlier. The Saints return standouts Jaden Freeman, George Pettaway, Kaleb Brown and Kemauri Spencer. Freeman was an All-State selection last season. The Saints have a lot of experience for a young group.

The Saints took a loss in the first round of the state tournament last season, but Fuhrmann believes they have bigger goals this year.

“This group has a really high basketball IQ,” Fuhrmann said. “Our expectations are high. With four of the five starters back and the things we have talked about, we want to compete for a conference title and a state championship. Our focus has to be on having championship-level practices every day, and we feel like the rest will take care of itself.”

NSA has a tough schedule this season with some formidable opponents that will prepare the Saints for the latter part of the season. They open up the season Tuesday against Western Branch High School, which will be a good test for the Saints to start off the season.