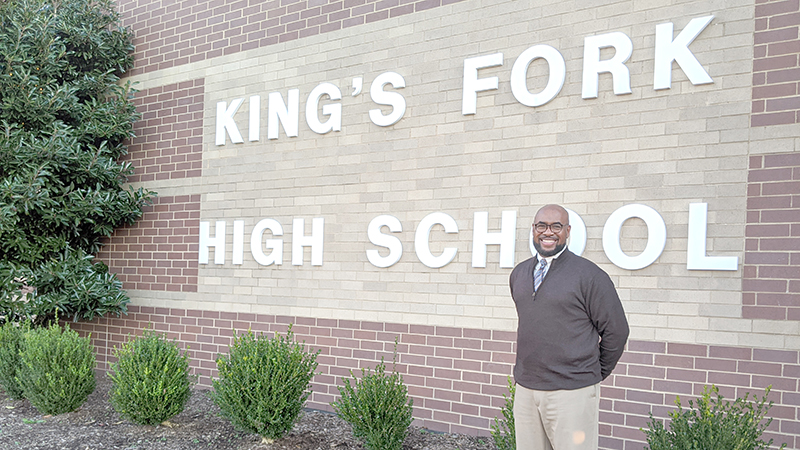 Derrick Bryant, who was raised in Suffolk, graduated Nansemond River High School and played college basketball at Norfolk State and then professionally overseas, is the new principal of King’s Fork High School.

Derrick Bryant didn’t know his path would go from basketball star to being an educator, but when he committed to it, he fully embraced it.

Bryant starred at Nansemond River High School, going on to play for four years at Norfolk State before embarking on a 10-year career overseas. But he wasn’t just an athlete — he was fifth in his high school graduating class, graduated from Norfolk State with a degree in business administration and management, and has earned a pair of master’s degrees.

In his transition from playing to coaching, he learned that he liked teaching, so he went back to school to receive his teaching license and did that for another 10 years, teaching computers and technology before spending the past three years as assistant principal at King’s Fork High School under then-principal Dr. Ron Leigh.

But with Leigh moving into the Suffolk Public Schools’ central office as director of secondary leadership, that left a place for Bryant to replace one of his mentors as principal at King’s Fork.

He’ll carry with him the lessons imparted from Leigh on the many car rides the two shared going to and from conferences and events. One of those lessons: Bryant will look at things differently now as principal than he did previously, especially with staffing.

“Fortunately, Dr. Leigh did a great job the previous three years training me for this,” Bryant said. “I don’t think either one of us had any idea this was going to happen this quickly, but he’s put me in a lot of positions to at least help me feel comfortable in a lot of positions since things have been thrown at me.”

He had another mentor at Nansemond River in Thomas McLemore, who spent 17 years as principal there before retiring in 2016.

“I had a couple of conversations with him about it, and he mentored me at Nansemond River,” Bryant said. “It was something that I wanted to do, just getting to the other side of things, and just progressing is interesting. I’ve always liked advancing and moving forward. I don’t like to get complacent in any position.”

As a principal, he said he looks at things much differently from when he was an assistant principal. He said he has always had good people around him, and that, even with the change in position, some things are still much the same. The biggest transition for him has been learning who does what in the school administrative office and knowing who to turn to when he needs something.

“It’s a funny feeling,” Bryant said as he sat in his office. “Things haven’t changed that much. I’ve still got my great admin team with me, other than Dr. Leigh. But even with him, twice a week, we come in here in the afternoons and we transition. Probably the biggest thing now is that I’m the bridge between the school and SAO (school administrative office) now. So, a lot of communications now come between SAO directly to me, whereas before, Dr. Leigh was intercepting those and then dispersing jobs out to everybody.”

Bryant said he would focus on continuing to enhance King’s Fork’s academic reputation and building on that. King’s Fork had the largest graduation rate increase in the Hampton Roads region this year, going from 84.1 percent in 2018 to 90.6 percent in 2019.

“King’s Fork, has, for many years, been thought of as an athletic school,” Bryant said. “But right now, academically, we’re solid. To me, we’re one of the best schools in the state as far as academics and what we’ve been able to do these past few years at King’s Fork. And I want to continue that.”

His goal: to make King’s Fork a 90/90/90 school — having 90-percent pass rates on math, science and English Standard of Learning tests.

“I want to continue to have the focus on academics here in this building,” Bryant said. “Our kids now understand that academics and real world scenarios, they go hand in hand. And teachers have been doing an outstanding job of making those things relate, helping kids see that, in the classroom, these are the same things you’re going to face outside the classroom.”

Bryant said he didn’t know when he graduated from Nansemond River that he would be an educator. He played four years of college basketball at Norfolk State on an athletic scholarship before going to Europe and playing professionally for 10 years. The lessons he learned — not to mention the Spanish he picked up — have kept him grounded and humble.

“I give basketball a lot of credit for things in my life,” Bryant said. “It was through basketball, me wanting to coach, that I actually found my passion, which is actually kids, which is crazy to me.”

He said he couldn’t imagine trying to do what he’s doing in another place, and it gives him an advantage in dealing with parents, students and other stakeholders at King’s Fork and in the school division. Suffolk has molded him, he said, to be the person he is.

“Me being homegrown, I think a lot of people that I grew up here with are now in positions that they’re my bosses,” Bryant said. “It’s easy for me to still have that relationship with them, and then them give me the hand that I still need to do my job well.”