Students get lesson in human trafficking 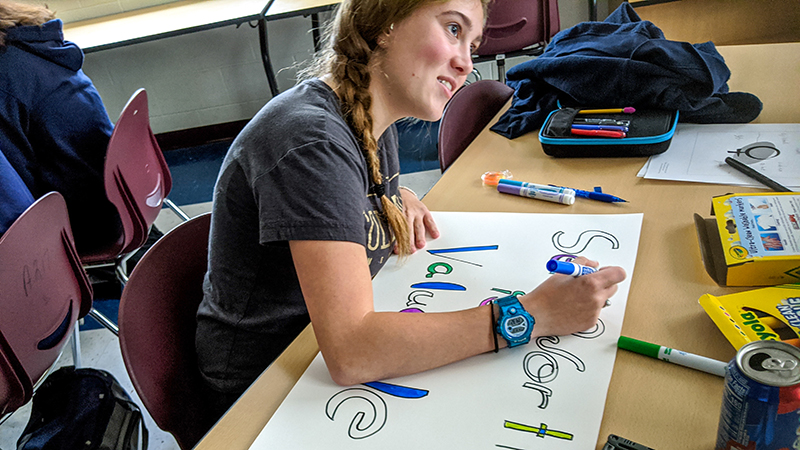 Jailynn Martin, 16, a junior at King’s Fork High School, creates a poster as part of a lesson on human trafficking in her Theory of Knowledge class.

Amanda Leija had not previously given human trafficking much thought.

But over the past week, the 16-year old King’s Fork High School junior and her International Baccalaureate Theory of Knowledge classmates have spent hours dissecting the subject and dispelling myths.

The General Federation of Women’s Clubs in Virginia initiated a two-year project, Step Up to Stop Human Trafficking, and the program is part of this school year’s curriculum as part of the Theory of Knowledge course that blends in various disciplines by exploring the nature of knowledge while also encouraging students to appreciate other cultural viewpoints.

The Chuckatuck Junto Club paid for a license from the Richmond Justice Initiative for a student curriculum on human trafficking, and IB teacher Stuart Jones has been teaching it as part of a pilot program that he and other club members hope will spread to other high schools.

“We felt it was incredibly important to expand awareness at this education level,” said Lorraine McGovern, the vice president and chairwoman of the Chuckatuck Junto Club.

Over the five days of the lesson, Jones has been getting students to think about what human trafficking Is and how big of a problem it is.

He then focused on human trafficking in the United States — how it is larger and different than most people think, who the traffickers are, the demand for it and then dissecting media’s influence in it and the oversexualization of culture.

The last lesson was to focus on how students can help and be involved in raising awareness of human trafficking and eliminating it.

Sitting in on Thursday’s lesson, McGovern liked what she saw.

“I’m impressed by the students’ awareness of the topic,” McGovern said, “and the excellent interaction with the instructor.”

“The students are articulating, they’re interested (and) they’re involved,” Esleeck said. “Nobody was taking a nap.”

For junior Jailynn Martin, 16, because she doesn’t watch the news, she said she didn’t have as much knowledge of sex trafficking.

“To be honest, I didn’t even know what it was,” Martin said. “I had a vague idea of what it was before this started, but I feel like I get a lot more out of this — what it is, why it’s happening and who it’s happening to. And it’s important.”

Using an article from Holly Smith — a victim of sex trafficking and the author of “Walking Prey” — as a jumping off point, the class focused on the oversexualization of culture.

“I think it’s important for students in general, IB students in particular, we’re supposed to focus on issues that both have a local context and a global significance, and this is certainly one that fits into that mold,” Jones said.

Leading into more positive images and thoughts of self-worth, Jones asked students to use The Prevention Project’s “I Am Priceless” campaign to promote positive self-worth through artwork or a social media post. Students could choose whether or not to post it online.

“It’s not what you are that’s holding you back,” Leija wrote in her Instagram Story post. “It’s what you think you aren’t.”

Leija looked inward for the inspiration for her post.

“I’ve had trouble with self-esteem,” Leija said. “I play softball here, so I’ll get down on myself because I didn’t do this one certain thing in the game. I may not have made a certain catch, but I still did fantastic, so I should be proud of what I am and what I’ve done, rather than what I didn’t accomplish in that day.”

Martin, on her poster, wrote two things: “Self worth is valuable,” and “Love yourself.”

The thoughts for her poster came from her upbringing — being homeschooled or in private schools the majority of her life, and constantly moving and having “a non-stable base for my home life.” The eighth grade was a key period that shaped Martin’s outlook on life.

“I was just like, I’m me. I’m who I am. That’s whatever,” Martin said. “But the minute I got into eighth grade, I was bullied by everyone. I was not accepted, and, I was bullied, like, not physically harmed, but emotionally and verbally insulted. It was terrible.”

But Martin went from being an outcast, not having friends she could trust and crying herself to sleep, to gaining that self-awareness and self-worth she espoused on her poster.

“I believe the more we learn, the more coats of paint our personalities get,” Martin said, “and so, after eighth grade, I got that coat of paint that made me understand, I am who I am, and I love myself no matter what, and what they say does not matter. I’m smart. I’m independent. I am the perfect person of myself that I can be at the moment. And I’m on the perfect path for my life. I’m not on their path, and the only person that’s going to be with me until the day I die myself. And I need to learn to, basically, co-exist with (myself).”

Jones and McGovern said the goal is to have the program expand into other high schools in the city. Leija said she hopes it will reach middle school students as well.

Jones called the human trafficking lesson an eye-opening one for his students.

“I think it dispelled a lot of myths for them, because a lot of them viewed human trafficking like in the mold of what we see in Hollywood movies,” Jones said, “of girls getting kidnapped and then sold into this, and, in the United States, that’s just not typically how it works out. It’s usually preying on younger students who are vulnerable, and potential runaways, and whatever it might be.

“So, it opened their eyes to the fact that it might be people, literally, at this school, who might be vulnerable to this because of their home situation.”