Saints get win in OT 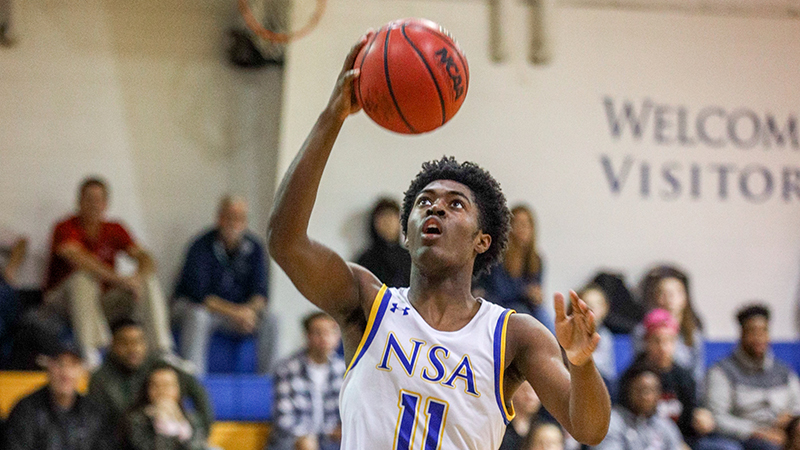 Kaleb Brown goes up for a layup in a Saints win during the Holiday Classic tournament they hosted over the weekend. (Jeffrey Dailey Photo)

The Nansemond-Suffolk Academy boys’ basketball team picked up a good double-overtime win against The Miller School.

The Saints are 5-0 on the year after picking up two wins over the weekend in the NSA Holiday Classic, and they bagged a 75-64 win against a formidable opponent in Miller School.

NSA jumped out to a 22-13 lead after one quarter of play before Miller started working their way back into the game and eventually take a lead of their own over the next two quarters. Both teams battled back and forth, which led to overtime. In the second overtime, NSA was able make more plays.

Kemauri Spencer led the way with 24 points, while Jaden Freeman kicked in 20 of his own. George Pettaway and Kaleb Brown also scored in double figures for the Saints.

Over the course of these first few games, the Saints have gotten off to a strong start, and Coach Chris Fuhrmann has been happy with the way his team has played. They have had to battle in a couple of games this season.

“I think we have been playing pretty well so far,” Fuhrmann said. “The guys are playing hard. Playing against these teams and getting wins over them is great. If we want to get to where we want to go, we have to beat those types of teams. Beating times like Miller will always give us confidence.”

NSA will play a couple of games this week before heading into the holiday break and returning at the top of the month in 2020.

Giles laying it all out for senior season