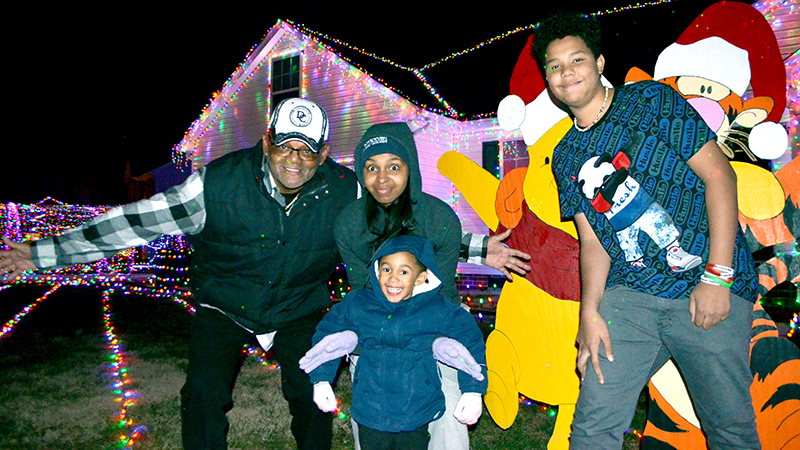 Standing with Winnie the Pooh and Tigger at the decorated Mitchell residence on Baron Boulevard Wednesday evening are Chanelle Johnson, her daughter Samaria, 4, Johnson’s father Keith Mitchell, and Antonio Riddick, 16.

Keith Mitchell loves Christmas, but he especially loves his family.

So, when his 4-year-old granddaughter Samaria Johnson asked her “Pop-Pop” for 100 lights this year, the 63-year-old Suffolk resident wanted to see how big they could get for “Peanut,” as he calls her.

“I wanted to see how big we could go,” Mitchell said Wednesday evening on his brightly-lit lawn in the Suffolk Meadows neighborhood, off Nansemond Parkway. “My granddaughter asked me for 100 lights. So I said, ‘OK, let’s go for one million.’”

The Mitchell residence at 300 Baron Blvd. is now a winter wonderland of Christmas creativity and spectacular holiday decorations, and a must-see for families and other fans of Christmas lights.

Keith Mitchell, who lives with his wife, Tammie Mitchell, said he’s already gotten an “unbelievable” response from people who have stopped by to see the decorations — the final, festive product after months of work with help from friends and neighbors.

“It’s like ‘whoa,’ and when folks come by, they come by all night, every night,” Mitchell said. “People come from everywhere, just to check them out.”

He gave credit to his friends and neighbors that helped him along the way, including Kenneth Piggee, George Gainey and Rakeem.

Most of all, he was grateful for the help of Antonio Riddick, a 16-year-old Nansemond River High School sophomore and a neighbor who has helped him work on this for months.

Mitchell and Riddick first started working on putting the lights on Mitchell’s roof back in September, Mitchell said, and remained hard at work on this holiday house project for the months that followed.

“A lot of what’s out here is his doing,” Mitchell said about Antonio. “He sees things as I see them, but he just takes them one step even further. He gets crazy with it, (and) his work turned out great.”

Antonio, who wants to be an architect one day, said he’s proud to see all of their hard work lit up on dark December nights.

“It’s pretty great. Everything looks pretty nice when it’s all lit up,” Antonio said. “You can see how everything’s come together, over all the time and effort we put into it.”

The list of aspects for this Christmas extravaganza is lengthy, starting with the tall plywood lawn characters throughout Mitchell’s property, which were handmade by his former neighbor Jeff, Mitchell said.

Visitors can spot a gingerbread man, Winnie the Pooh with Tigger, and the mean Mr. Grinch as he tries to steal the lights on top of Mitchell’s decorated shed. Projectors cast moving images of snowflakes on the shed, and of Santa Claus on the house.

Classic Christmas songs like “You’re A Mean One, Mr. Grinch” can be heard outside, and also “Silent Night” by The Temptations, “Linus and Lucy” from “A Charlie Brown Christmas,” and many others that add to the lights that warmly glow throughout the property.

A tunnel on the driveaway is wrapped in lights on top, and a pair of snow machines are attached to provide visitors with flakes.

Every visitor gets to share in the enthusiasm Mitchell has for the season.

“I get worked up,” Mitchell said when it comes to decorating for Christmas. “I love it. This is my favorite time of the year.”

Mitchell grew up in Virginia Beach, and his parents would take him around town to see the Christmas lights. He wants his granddaughter to have the same kind of holiday memories he still cherishes to this day.

“I just wanted her to be able to think back one day, and think (about how) her grandfather put up Christmas lights,” he said.

Samaria ran through the rows of Christmas lights Wednesday evening and bounced with joy as the snow machines brought precipitation in the brightly lit tunnel.

Chanelle Johnson, Samaria’s mother and Mitchell’s only child, said that it’s a great way for her daughter to let out some energy, while she enjoys her big, bright Christmas gift from “Pop-Pop.”

“She loves being able to say that this is something her Pop-Pop did for her, so it makes me very excited to see her happy, and know that this is the reason she’s smiling,” Johnson said. “She’s loving the joy of it, and she loves the fact that the joy part come from her Pop-Pop, with the lights.”

December is a big month for the Mitchell household, and a peaceful time for family fun.

“It’s a peaceful time for me, (and) it’s a fun time for me. It always takes me back to my childhood, it always does, and for us, Christmas was always family,” he said.  “It’s always been about family for me, and I love it — and plus Christ himself.

“Christmas is a biggie for me — the biggest.”