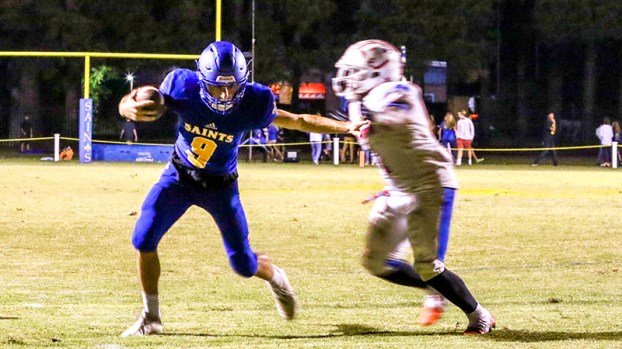 Drew Bergeron was selected first team All-State at defensive back and punter for the Nansemond-Suffolk Academy Saints. (Chris Dailey Photo)

The Nansemond-Suffolk Academy football team had 11 players selected to the All-State teams.

After a slow start to the year, NSA finished the second half of its season strong. The Saints almost put themselves in position to make a playoff run but fell just short of their goal. Regardless of the outcome of the season, there were some strong individual performances throughout the year for the Saints. It was evident by the 11 selections they totaled on the Virginia Independent Schools Athletic Association Division II All-State teams.

“I am honored to be selected All-State,” Bergeron said. “It is all thanks to my teammates and coaches. It was a group effort and I couldn’t have done it without them. We went through a lot of adversity as a team this season and unfortunately things didn’t go the way we wanted them to, but it was awesome to see the bond we created.”

“I feel good about making it, knowing it was something I wanted to accomplish coming into the season,” Freeman said. “Now it’s just continuing to build on it for next season. For as many of us to get recognized, it just shows the hard work and dedication that we all put in all season as a team.”

NSA was able to get some very good production out of players competing in their first year, which Coach Mike Biehl mentioned was a testament to how hard they worked and grasped things. The Saints return a solid core next season and will look to bounce back.

Suffolk hoops will be on display shortly after Christmas as all three Suffolk Public Schools boys’ teams will compete in... read more