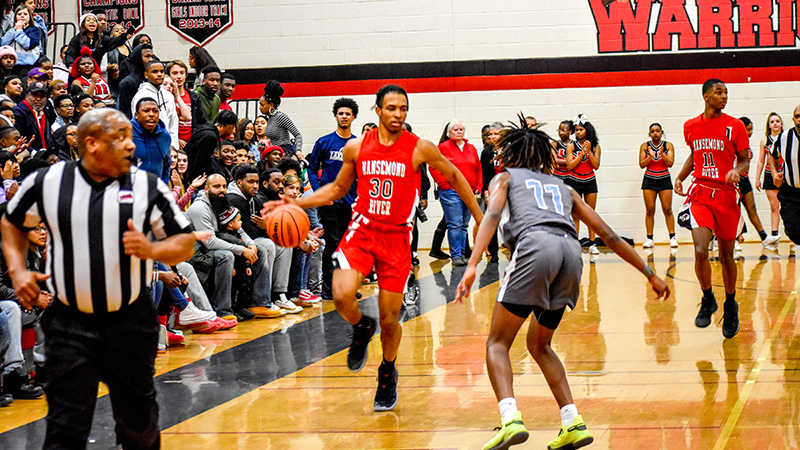 Justin Fatherly looks to make a play for the Warriors. All three Suffolk Public Schools will compete in the King’s Fork High School Christmas Tournament this Friday and Saturday.

Suffolk hoops will be on display shortly after Christmas as all three Suffolk Public Schools boys’ teams will compete in a holiday tournament.

King’s Fork High School will host its annual Christmas Tournament beginning Friday, featuring both Nansemond River High School and Lakeland High School. The tournament always makes for some good matchups between rivals within the city over the holidays.

The tournament will be held Friday and Saturday. Lakeland will take on John Champe High School for their first matchup, which will be held at 6 p.m., while Nansemond River and King’s Fork will have the nightcap at 8 p.m.

The Bulldogs and Warriors will match up for the second time this season, having played against each other to open up the season. There could also be a rematch between the Warriors and Cavs if they both advance, or it could be the first time Suffolk fans will see Lakeland and King’s Fork match up this season.

“I am glad we are able to put something on like this for the city,” Lakeland Coach Clint Wright Sr. said. “Suffolk deserves quality basketball, and I feel like all three schools will give that during this tournament. We are excited just to continue to be involved in this tournament and we know there will be some great basketball on display with the Suffolk schools.”