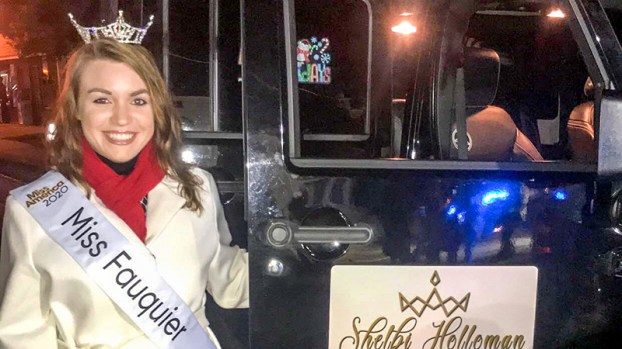 Shelbi Holloman, a Nansemond River High School graduate and Suffolk resident, recently won the Miss Fauquier 2020 pageant, qualifying her for the Miss Virginia pageant to be held in June 2020 at Liberty University in Lynchburg. (submitted photo)

A former Nansemond River High School graduate is hoping to follow in the footsteps of the Miss Virginia 2019, who also happens to be the recently crowned Miss America.

Shelbi Holloman, 24, qualified for next June’s Miss Virginia pageant at Liberty University in Lynchburg by virtue of winning the Miss Fauquier 2020 title, and will look to replicate the success of Camille Schrier, who earlier this month was crowned Miss America 2020.

The win was a shock to Holloman.

“When they called my name, I started crying, I’m not going to lie,” Holloman said. “It didn’t hit me until I hugged my mom and she was like, ‘You know you’re going to Miss Virginia,’ and I was like, ‘Well, I know.’”

The Miss Virginia organization has about a dozen local pageants statewide, and candidates are free to compete in any of them as long as they meet the other requirements.

Holloman used to compete in pageants when she was younger, but stopped around age 11 to focus on sports such as soccer, softball, field hockey and track and field. She went on to play field hockey at Roanoke College and holds the school records for most goals and most points scored in her playing career.

But Holloman was always about more than just playing sports; she also wanted to find a way to give back.

While in college, she suffered a minor knee injury, and though it was a blip on the radar for her collegiate athletic career, it spurred her into her current career path as an athletic trainer.

Holloman had put the idea of competing in pageants on the backburner, but during college, she felt the desire to get back into them again and won the first one she competed in. She once again put pageants on hold while completing her bachelor’s and master’s degrees before setting her sights on the Miss Virginia title.

Part of competing involves a talent portion, outlining a social impact platform and interviewing before the judges. There is no longer an evening gown competition within the pageant, but pageant contestants wear one as they get judged on their public speaking skills.

Holloman’s social impact statement centered around what she calls the three A’s — active, athletic and ability.

“The athletic part is just talking about my experience with sports, what I learned from them, what it gave me. Then, the ability part is just the ability that we have so many resources at our hands to get involved in sports, to apply for scholarships when you hit the high school level to go to college.”

Holloman will be using her own money to give away two scholarships this spring to a male and female athlete at Nansemond River.

“I get to show them that it doesn’t matter where you come from, you can go to go college and apply, because that’s what I did when I was at Nansemond River, which is apply to anything and everything,” Holloman said.

After that, she will be going to Suffolk middle schools and helping out with their field days to do her part to help obesity levels drop, citing her experience in working with CHKD.

“I see a lot of young kids come in that are way over the weight that they should be,” Holloman said. “And they’re getting exposed to injuries that are not sport-related because of these circumstances.”

Though Holloman performed a dance routine to the Lauren Daigle song, “You Say,” for the talent portion of the Miss Fauquier competition, she is looking to change it up for the Miss Virginia competition, citing Schrier as inspiration. Schrier did a science experiment as her talent, showcasing the catalytic decomposition of hydrogen peroxide, setting off a series of multicolored foam spouts.

Holloman plans to incorporate her career as an athletic trainer, as well as her passion for dance, but she said the challenge will be to do both in the allotted 90 seconds. She is looking to showcase her career talent in the first 30 seconds, then surprise people with the dancing for the rest of the time.

Holloman has always been able to display multiple talents, dating back to high school when she earned Nansemond River’s Warrior Award for versatile athletic excellence — she earned 11 varsity letters in four different sports, including four in field hockey, four in indoor track and field, two in softball and one in outdoor track, and was named first-team All-District in field hockey as a junior and senior and first-team All-District in softball as a sophomore.

Holloman said the changes to Miss America and other pageants to de-emphasize physical beauty and instead focus on intelligence and skills are for the good.

“I think the changes that Miss America is doing are positive, especially for girls who didn’t have the confidence to be onstage in a bikini,” Holloman said. “And those who don’t necessarily have a talent. Like, my dancing isn’t my strongest suit, but you can go on that stage and do anything because, I mean, Miss Virginia did a science experiment … and it won her the title. So, it’s definitely changing, but it’s changing for the better.”

She wants to use her platform to inspire young people, especially girls.

“I was that little girl who thought she had to have the prettiest gown, the prettiest hair, makeup all done,” Holloman said. “But really, that’s not the case, especially now. Don’t always go off of what you see on social media, because that’s a big factor in what girls see as beauty, especially today. Don’t be afraid to be yourself and show your true authentic style and self, no matter what you do.”

Holloman said the timing is perfect to make a run for the Miss Virginia title.

“I think I’m just at a point in my life where I have a good career, my schooling’s behind me, I’m single, so I don’t have anything tying me down,” Holloman said, “so I think I can put all of my energy into Miss Virginia coming up in June and give it another go.”

No matter the result, she’s ready for what’s ahead.

“I made my long, little girl dream come true of getting to the Miss Virginia stage,” Holloman said. “If I walk away with the Miss Virginia crown in June, then I’ve got a better job promotion, pretty much. If I don’t, then I will continue just spreading my platform throughout the rest of the year as Miss Fauquier.”

Reading for a winning trifecta