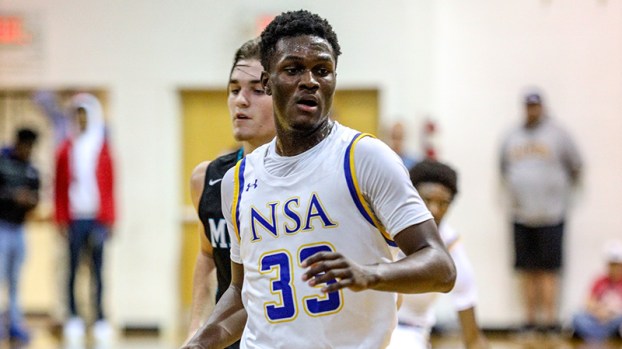 Kemauri Spencer was voted Suffolk News-Herald Player of the Week after scoring 16 points for the Saints in a win over Williamsburg Christian Academy.

The Nansemond-Suffolk Academy boys’ basketball team has gotten off to a strong start so far this season. They are 6-1 on the season and have all the makings of the team that can accomplish big things this season. Spencer has been an integral part of his team’s success. In a nail-biter against WCA, Spencer scored 16 points to help the Saints get the win.

“I feel like I played well, but I am never satisfied,” Spencer said of his performance. “My team put me in a position to make plays, and in the end, we got the win.”

As it currently stands, he is the leading scorer on the team throughout seven games. He knew coming into his junior season that he could be on pace to do some good things this season, considering the hard work he put in over the summer. Even though he has been able to reach double-digits in points through all of NSA’s wins this season, he still believes he hasn’t played his best basketball yet, and as he continues to get more games under his belt, he hopes to reach that stride.

“I got in the weight room and just added to my explosiveness,” Spencer said. “I wanted to improve on my midrange game while also improving my ball handling. I don’t feel like this has been my best yet. I’m just ready to show how hard I’ve been working this summer.”

Spencer knows how good the Saints can be this season and has big goals. He wants to help his team win a conference title and eventually a state title. As a team, he believes they are only scratching the surface through these first few games, with more things starting to come together, starting at the top of 2020.

“I feel like we are off to a great start, but this is just the surface,” he said. “We have all the room to grow, and I can’t wait to see what this team is about come playoff time.”

When he steps on the court, Spencer is motivated by his family and also his teammates he battles with every night on the court. He models his game after NBA All-Star Draymond Green of the Golden State Warriors. He is a hard-nosed player that hustles for his teammates, and that’s exactly what Spencer wants to do for his team.

The NSA junior is a two-sport standout, having recently finished up football season selected second team All-State at linebacker.