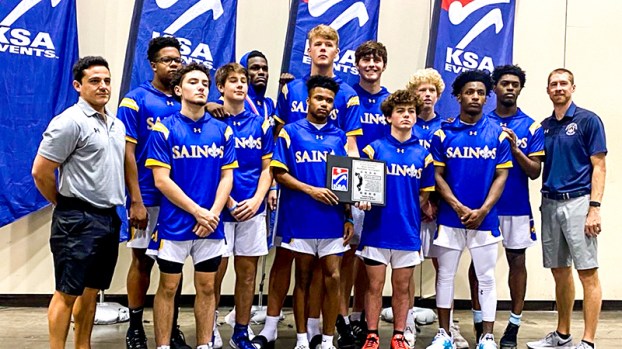 The Saints went 2-1 as they played in a holiday tournament down in Florida. (submitted photo)

The Saints went down south for the holidays as they competed in holiday hoops in Florida. In three games, they went 2-1, losing their first game in a close matchup and winning the final two against Wade Christian School and Highland Christian School, all teams based out of Florida.

A slow start in the first game was the difference, as they lost by four points; however, Coach Chris Fuhrmann was satisfied with what the Saints were able to do as they also dealt with injuries.

“We were without a couple of key guys, so we kind of got off to a slow start that first game,” Fuhrmann said. “However, we were able to adjust in the final two games and the guys were able to do some good things. It was good to be able to play against some teams we aren’t familiar with and try new things and work some different adjustments.”

George Pettaway, Kemauri Spencer and Kaleb Brown were able to do some good things in the midst of lineup changes. The Saints were able to get all-around contributions in their two wins.

NSA is 8-2 on the season so far and will get ready for conference play next week. The Tidewater Conference of Independent Schools has talented teams, and the Saints know they’ll need to a strong start if they want to be among the top teams in the TCIS.

“A lot of those teams have been playing really well throughout the season,” Fuhrmann said. “I’m hoping that our non-conference schedule will prove beneficial for our guys as we head into conference play. It’s going to be a tough league this year, but we feel like we are prepared.”

As the team nears full health, the Saints are capable of doing some good things in a deep TCIS. For the first time in the last few seasons, NSA has had the same coach for back-to-back years. The Saints hope to build some momentum in the back half of the season, which will bode well for them come playoff time.