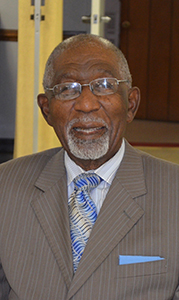 Suffolk native Dr. Robert E. Rodgers is retiring as pastor of Pulaski Baptist Church in Carrsville after more than 48 years at the position. (submitted photo)

After 48 years and nine months of ministry and service, Suffolk native Dr. Robert E. Rodgers is retiring as pastor of Pulaski Baptist Church in Carrsville.

Rodgers was a graduate of East Suffolk High School Class of 1952. In a phone interview on Dec. 30, he recalled Oak Grove Baptist on East Washington Street, the church where he was baptized and the one where he preached his first sermon in May 1970.

His sermon was called “Checking In and Checking Out,” in which he used scripture to discuss turning your life over to Jesus Christ, just as he did when he answered “the call to preach.”

“The call to preach the gospel was constantly on me. I couldn’t get away from it,” Rodgers said. “The more that I tried to avoid doing it, the more that it was pressed upon me. I reached the point in my life that I was tired of trying to avoid the responsibility that the Lord laid on me, so I surrendered to His cause.

“I was giving my life to Christ, and I was checking in to His service.”

That led him to Pulaski Baptist Church in Carrsville, his one and only church as a pastor.

“Our church has only had 10 pastors in 153 years, and I’m honored to have had the longest tenure of any pastor to have served that wonderful church,” he said.

They were able to add an additional fellowship hall to the church during his long tenure, among other renovations. But what really stands out to Rodgers are the many ministries that have benefited the community.

They include a food bank that assisted members of the community through difficult times, and a scholarship committee that helped students who graduated from the former John F. Kennedy High School.

There’s also the video ministry that taped Sunday sermons, then delivered them to the homes of parishioners who were unable to come to church.

“We would take those services into their homes, and we would leave a monetary gift with the persons we would visit,” Dr. Rodgers said.

Pulaski Baptist Church has also given more than $50,000 to Virginia University of Lynchburg, according to Rodgers.

The university — formerly known as Virginia Seminary and College — is where his father received his theological training, and where Rodgers was awarded an honorary Doctor of Divinity degree in 1986. Rodgers served on the Virginia University board of trustees for more than 30 years, he said.

In addition to all that ministry and fundraising, he will also remember the many marriages and baptisms he performed for his parishioners.

“These are the things that were most important to me during my pastoring. Being there for the people, counseling them when they were having difficulties in some form in their lives, comforting them during the loss of loved ones,” he said. “These things were very important, and it really made me feel that pastoring was the best thing that had ever happened to me.”

The church will hold a retirement banquet for Rodgers at 3 p.m. Saturday at the Edmonds Center in Portsmouth.