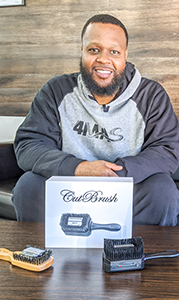 Marrico Simpson patented a product called the CutBrush that combines a hairbrush and a trimmer to make grooming people’s hair easier.

Marrico Simpson was looking for a way to help people simplify taking care of their own hair in between visits to the barber.

Having cut hair since he was a pre-teen, Simpson, 32, came up with the idea in June 2017 to create a product that combines a hairbrush and a trimmer to make grooming their hair easier.

He was teaching a former student and best friend of his, David Bullock, how to cut his own hair.

Bullock had issues with holding the brush and cutting his hair at the same time, so Simpson set about solving the problem.

“What I mentioned to him was that you actually cut your hair the same way you brush it,” Simpson said. “And when I mentioned that to him, that’s how the idea came about. Then I thought about, ‘What if they had a blade in the middle of a brush, and all they had to do was brush their hair?’ You’ve got to keep that hair maintained until they come and get a haircut in the barbershop.”

Simpson, who owns the barber shop and beauty salon Cut N’Shears, had a company do a patent search on the product, and not finding anything similar, the CutBrush, as it is called, went into the patent pending process in November 2017.

“If you can brush it, you can cut it,” Simpson said.

That’s the saying he came up with for the product.

Less than a year later, he established a company for the product, 4MAS Grooming Inc., with Bullock as vice president. The name has special meaning for Simpson, as it stands for the initials of his three daughters, Mallori A. Simpson, Madilyn A. Simpson and Maci A. Simpson.

“What I’m saying in that logo and in that name is that everything I’m doing, I’m doing for them,” Marrico Simpson said, “to leave a legacy for them.”

In 2018, he found someone to make a conceptual design of the product from the brush he had initially handmade. Someone wanted to charge him between $20,000 to $30,000 just to draw up a conceptual design. That was a non-starter for Simpson, so he found someone to make a drawing for him for just $50. That person, he said, had a contact in China that he said could make the product.

But there was a good reason why Marrico Simpson would be skeptical of the idea.

No, not the Bruce Lee who was the martial arts star and actor.

“I thought it was all fake,” Simpson said, laughing. “Bruce Lee’s dead.”

It was a different one, and while it didn’t take too long to let go of any skepticism, his family wasn’t as sure.

“My family, they had doubts,” Simpson said. “They all thought that Bruce Lee was fake, and then they told me, ‘Don’t send money overseas and stuff.’ It was just a lot of doubts.”

Like him, they came around when the saw the finished product, and they always supported him.

The product created plugs into a USB port to charge for about four hours, and comes with five different size guards, depending on the length of the hair. The guards and the brush are detachable.

The business for the product was established in July 2018, and the CutBrush went on the market Jan. 1, 2019, five years to the day when his daughter Mallori was the first baby born in Suffolk that year. It retails for $59.99.

After his patent was rejected more than a dozen times, it was approved Oct. 19, 2019. He has a website for his product, www.4masgrooming.com, and it is also being sold on Amazon.

Marrico Simpson is waiting to hear back from the TV show “Shark Tank” to see if he will get to share his product with the investors on the show. While he was contacted by representatives from the show, he has yet to be selected to appear.

In the meantime, Simpson has plenty to keep him busy. Besides selling his product, he’s busy cutting hair at Cut N’ Shears, which has been open at 148 Burnetts Way, Suite 111, since March 2012, and teaching people how to cut hair through his CNS Beauty Academy.

Simpson, who came to Suffolk from Mississippi because the city reminded him of home, served in the Navy for 10 years before retiring and settling down.

He credits many for the success he’s had, including his wife De’Ja Simpson, his children, his parents, Pamela and Calvin Causey, and his brothers, Jeremey Causey and Mario Hyatt.

His best friend in fifth grade and his “Auntie” Belinda Simpson, a stylist herself, got him interested in cutting hair. Now, Marrico Simpson is a licensed barber and cosmetology instructor with his own shop, a patented product and a school to teach people how to style hair. He rolls off all of their names, and a couple of more, aunts Faye and Bridget Simpson, giving them credit for helping him and supporting him along the way.

The next step he said, is refining the product to be used for grooming pets. Sales and reviews of the CutBrush have been good, and Simpson, who has a degree from Old Dominion University and is studying for his Master’s in Divinity at Regent University, is looking forward to what the future holds for his product.

“People are saying that it’s very convenient,” Marrico Simpson said. “It’ll keep their hair groomed because most people with short hair brush their hair every day, so if they can use this every other day, it’ll keep it at that same length for them.”