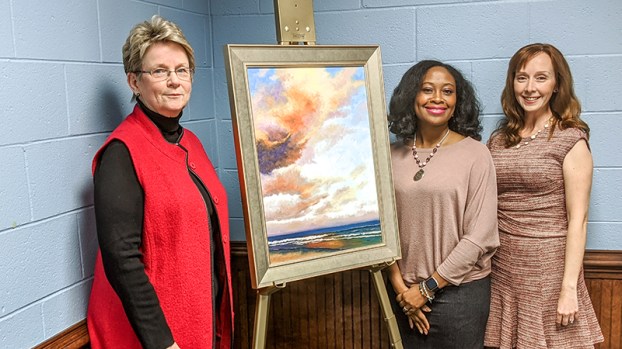 B. Kay Gerehart, left, is the featured artist and honorary chairwoman of the 34th Annual Nansemond-Suffolk Academy Art Show and Sale. LaToya Shine-Mason and Shannon Langford are the co-chairwomen of the event.

Gerehart to be featured artist at NSA show

When B. Kay Gerehart’s life partner of 27 years, Artie Liles, died last year, she used art as a way to work through her grief.

Though Gerehart, 69, started painting later in life, she has accomplished much in a short time and is now the featured artist in Nansemond-Suffolk Academy’s 34th Annual Art Show and Sale, which takes place at the school from Jan. 25 through Feb. 2.

Being a featured artist is something he always wanted for her, and the two used to come to the NSA show together — the last time being two years ago.

“All of my art is through him,” Gerehart said.

Sometimes she’ll go to her studio and just sit, and she writes daily to him in a journal — “Letters to Arthur” — about the things that have happened in her day, but she said being the featured artist and honorary chairwoman has pushed her.

“The two things that I’m just truly thankful for, in addition to all the people that have been supportive of me is, one, I have the art to do, (and) that I have the studio to go to every day, even if I don’t paint,” Gerehart said. “And the greatest gift is being the featured artist in this show, because it made me go to the studio, it made me function, it has made me paint. And I don’t know where I would have been this year without it.”

Though late to art, Gerehart has pursued her new passion with a purpose and a flourish.

After wrapping up her career in commercial and corporate real estate in Vermont and Virginia, Gerehart split her time between Norfolk and the small town of Mathews in the middle Peninsula, and in 1999, opened a retail store and gallery that showcased regional artists in Mathews.

She began to pursue her own interest in art with mosaic tile, glass wall art and acrylic painting in a mostly primitive folk art style, and in the winter of 2008, Gerehart took a trip to Key West and was introduced to oil painting under a locally renowned artist, Letty Nowak.

She continued her oil painting interest with private lessons from the late Charles Kello. Her style involves using a limited palette of five colors — Ultramarine blue, a Viridian green, Elizabeth crimson, Cadmium red and Cadmium yellow — plus a soft-mixing white, to capture atmosphere, light and shadows.

“Every painting that I have is done with those colors,” Gerehart said. “Of course, sometimes I’ll waste a lot of paint trying to get the color that I want.”

In the summer of 2008, she closed her store to focus on painting full time, returning to Norfolk in May 2016, where she now lives full time and has a studio there downtown on the second floor of the Monticello Arcade building.

Gerehart, who is a member of the Oil Painters of America, the American Impressionist Society, the Hampton Art League and the Suffolk Art League, will feature about 50 pieces of art at the NSA show, with the opening ceremony and reception taking place from 10 a.m. to 4 p.m. Jan. 25 at the school’s Main Campus Lower School Lobby at 3373 Pruden Blvd.

A Sponsors’ Reception, featuring more than 150 sponsors, takes place Jan. 24. LaToya Shine-Mason and Shannon Langford are the co-chairwomen of the Art Show and Sale, which will feature works from nearly 200 different artists, with more than 100 volunteers helping to set up the paintings.

“This show is one of the largest shows in the Hampton Roads area,” said Melissa Hlinovsky, NSA’s assistant director of advancement.

Everyone at the school is geared up for the event.

Said Langford: “It’s really a community event for our school and for the Suffolk community.”

Families visited the fellowship hall at Suffolk Christian Church on Saturday and Monday to get warm, winter clothes during the... read more