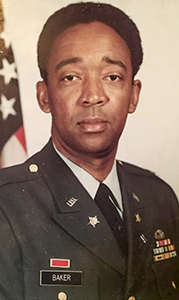 Col. Wardell Gladen Baker (U.S. Army, Ret.), of North Chesterfield, 78, passed away at his home peacefully on Jan. 2 after a long and courageous battle with cancer. Wardell was born in Suffolk on July 4, 1941, to the late Obediah Gladen and Thora Virginia Baker. Influenced by his grandparents and parents, at an early age Wardell joined Mt. Sinai Baptist Church.

His education began at Silver Spring Elementary School in Holland and later at Nansemond County Training School. While at NCTS, Wardell participated in Student Council, the Drama Club and the New Farmers of America. He graduated in 1956 as the valedictorian and senior class president. Dr. John L. Lockett, director of the School of Agriculture at Virginia State College, visited NCTS and recruited Wardell to attend VSC. Wardell met his future wife, Helen Marrow, of Halifax, N.C., at VSC. Upon graduation in 1960, Wardell was commissioned as a second lieutenant in the U.S. Army. In June 1962, he married Helen.

Upon retirement from the Army in 1987 at the rank of colonel, Wardell directed the logistical services at Southside Virginia Training Center. In 1997, he returned to his alma mater (now Virginia State University) as associate vice president for student affairs. He officially retired in 2004.

Wardell facilitated the nomination, submission and listing of both Mount Sinai Baptist Church and Nansemond County Training School on the Virginia Landmark Register, the National Register of Historic Places and the Virginia Highway Marker Program.

Wardell had a deep passion for collecting automobiles, playing golf, visiting the family farm in North Carolina, spending time with family and friends, and helping others by his involvement in military alumni, neighborhood and civic organizations. Wardell was an active lifetime member of his beloved Omega Psi Phi Fraternity Inc. for more than 60 years.

The family is grateful to the doctors, nurses and other health professionals at McGuire Hospital, Sarah Cannon Cancer Institute at Johnston-Willis, Lucy Corr Health Care Center, James River Hospice and Right At Home. They have our deepest gratitude for their compassion and professionalism.

A funeral will be held at 1 p.m. Saturday, Jan. 11, at Mt. Sinai Baptist Church, 6100 Holy Neck Road, Suffolk, with a viewing beginning at 12:15 p.m. Interment will follow at the church cemetery.

In lieu of flowers, donations may be made to the American Cancer Society.