Who doesn’t love a Jeep? 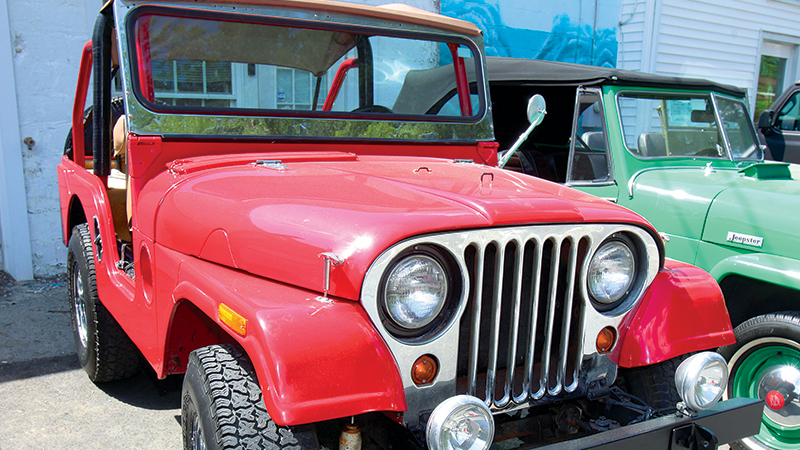 Jim Holloman’s passion for Jeeps started more than 50 years ago when he got his first Jeep Wrangler. He was a student at Indian River High School in Chesapeake, and his affection for the adventure-loving vehicles has only grown since then.

Now his small collection numbers five Jeeps. Travelers along Godwin Boulevard are likely to spot one or two of Holloman’s vintage Jeeps parked by his business, Isle of Wight Plumbing Service, in Chuckatuck. Their classic lines and rakish flair suit the village’s country crossroads character.

Why does he love Jeeps? He was never in the military. He doesn’t show them at car shows. Until 10 years ago, he had never four-wheeled along an Outer Banks beach. He doesn’t spend hours tinkering with them to hone their performance. He isn’t even certain how to use all the gears on the oldest models.

“I just enjoy the Jeeps for myself,” he said, chewing thoughtfully on his ever-present Thompson cigar as he considered why he loves a Jeep.

“The best thing about a Jeep is that you can go anywhere you want to go — they have a low gear ratio and four wheel drive. My Jeep truck and the 1948 Jeepster will go 70 miles per hour,” he said, gazing at the cigar, now in his hand, as if the answer might be there. “When you get a Jeep, it is so expandable you can personalize it — but the gas mileage is terrible.”
Still deep in thought, he added, “Oh, I don’t light the cigars — except when I’m with my brother. I just chew on ‘em.”

Holloman’s career started in maintenance, but when the company plumber arrived one day too hung over to work, he moved up into the positon and continued to learn the trade. He moved to Suffolk in 1987, then to Zuni when he moved his business to Benn’s Church. When a building became available in Chuckatuck, he was happy to move the business there and have room for his Jeeps.

His favorite driver among the Jeeps might be the 1946 Army Jeep he bought for $10,000 at a charity auction.

It’s a contrast to his newest Jeep, a 2018 Wrangler that he likens to a Cadillac.
His “other” favorite Jeep is his 1954 Jeep truck, his work vehicle.

“It was born the same year I was and gives me the least trouble,” he said. “The first things to go on old Jeeps are the carburetor and the distributor.”

Then there is another favorite, the Kelly green 1948 Willys-Overland Jeepster that he found on eBay and then found someone to restore it for him. The Jeepster, Willys’ first attempt to break into the passenger automobile market, is also the favorite of Deb Holloman, Jim’s wife.

“The others are so jacked up that it’s harder to climb into them,” he said.

After finding the Jeep in South Carolina, Holloman had it restored with a rebuilt engine and transmission.

Vintage as they may be, the Holloman Jeeps are not “garage queens,” but are all road ready — and often on the road with Holloman at the wheel. Keeping the Jeeps running requires a good mechanic, and Holloman is quick to say, “I am a plumber, not a mechanic, and I struggled until I found Tony.”

Tony is Tony Macioci, owner of the Smithfield Auto Center, who agrees that he is the more qualified mechanic but knows who to call if he needs a plumber. Macioci grew up working on cars 30-plus years ago in garages owned by his grandfather and father in Ohio. He claims, with a smile, that nothing automotive intimidates him, not even Holloman’s occasional attempt at repairs.

If you happen to see a unique vintage Jeep on the road and the driver is chomping on a cigar, wave or give Holloman a thumbs up. He loves to see people enjoy his Jeeps as much as he does.