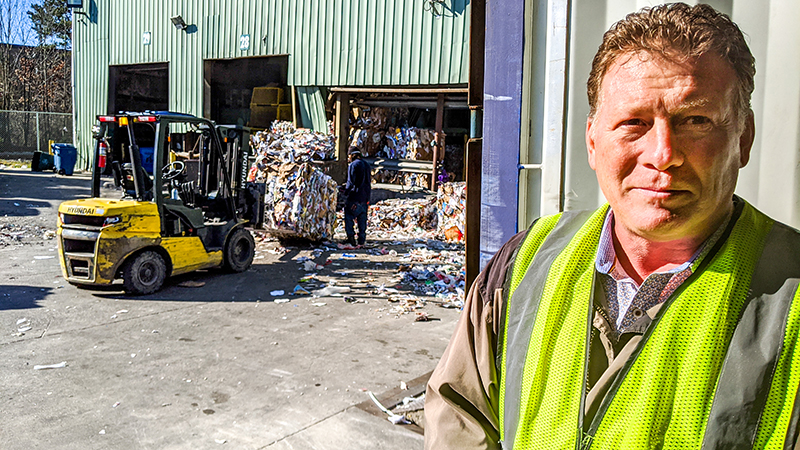 Michael Benedetto, the president and owner of Tidewater Fibre Corporation Recycling, said 20 to 25 percent of what comes into its Chesapeake facility is trash, and because of that, it costs the company more to sort it.

Editor’s note: This is the second story in a series about recycling in Suffolk.

The way recycling has been working in Suffolk, and the way it could work in the future, is up in the air, as the city and Tidewater Fibre Corporation Recycling have not come to terms on a new five-year contract.

Under the previous agreement, and under the terms of the second extension of the contract that the city and the Chesapeake-based company are operating on, TFC picks up recycling that residents place in their blue cans every two weeks.

In the last five-year contract that expired in October, $3.10 of city residents’ monthly fee has been going to TFC, which is asking for an increase of that fee in a new contract to something “less than $5” per month, according to its owner, Michael Benedetto.

The city issued a request for proposal that would maintain the current level of service, with only TFC coming back with an offer, asking for 60 percent more than what the city had been paying, according to Public Works Director L.J. Hansen.

That cost, according to Hansen, included unknown cost escalators and other measures to handle recycling contamination issues. That has the city thinking about putting a new, broader RFP out there, but what is in that will depend on whether the two parties can work out another temporary agreement to handle the city’s recycling while it goes through the budget process.

Without a short-term deal by Jan. 31, Hansen has said city refuse trucks would begin collecting blue cans that are placed on the street and delivering them to the Southeastern Public Service Authority for it to handle, and the city would also increase the number of recycling events and identify possible sites for convenience centers.

Contamination in the recycling is a big factor in why the program doesn’t work as well as it should, according to both city officials and Benedetto.

“That’s the underlying issue, I think,” City Manager Patrick Roberts said Friday. “We can talk about the financing of it and how much it costs and how we pay for it, but the reality is, throughout this whole discussion, we’ve got to come up with some ways to help educate folks on how the program works, how we can make it better, and also, put some enforcement mechanism in place.”

Roberts said there are some residents who think TFC will recycle anything in the bin, which he said is hurting the program.

“It all starts with, if you see your neighbor put furniture, food waste or yard waste in your blue recycle bin, if there’s a polite, friendly way to encourage your neighbor not to do that, that’s what we want folks to do,” Roberts said.

Benedetto hopes the conversation can shift so that people are properly sorting recyclable materials from what should be in the trash bin.

“There’s so much stuff that people are putting in the trash container that could go into the recycling container,” Benedetto said. “And if we can get more people to recycle more material, and the right material, more often, the city is going to save money because the amount of trash goes down, recycling goes up.”

Kathy Russell, the chairwoman of Keep Suffolk Beautiful and the educational outreach and special events coordinator for TFC, said there’s a misunderstanding that it won’t take any contaminated material.

“If somebody puts the wrong thing in the recycling bin and it goes in the load,” Russell said, “that whole load is not rejected because of them. … It still goes through the system.”

However, with 20 to 25 percent of what comes into to TFC’s facility being trash, it means there’s an added cost to sorting through it.

Last week, the facility was humming through the recycling process, from the trucks coming in at the scales, to the sorting, baling and then shipping of recyclables via containers overseas through the Port of Virginia to markets in southeast Asia and elsewhere.

“We want residents to understand that we are doing the right things with material,” Benedetto said. “It is still moving. It is still being recycled and it is going to new products.”

He said residents can help by understanding what TFC wants — generally, paper, bottles and cans.

“Just put those items in the bins so they can help recycling to make it more efficient and effective,” he said.

Both Benedetto and the city said residents need to adhere to the “reduce, reuse, recycle” mantra more closely. They want to see residents prioritize how they use goods in that order.

And though Roberts did not say Friday what kind of recycling service the city would have if it doesn’t reach an agreement with TFC, he noted some possibilities in December.

Benedetto said the city has asked for a number of recycling service options, including drop-offs, which he believes is not viable, reducing service to once per month, continuing service as is, or reducing some materials going into TFC, such as glass.

“They’ll go through their evaluation,” Benedetto said, “and determine what makes the most sense based on what they hear from the public.”

TFC hopeful of agreement with city