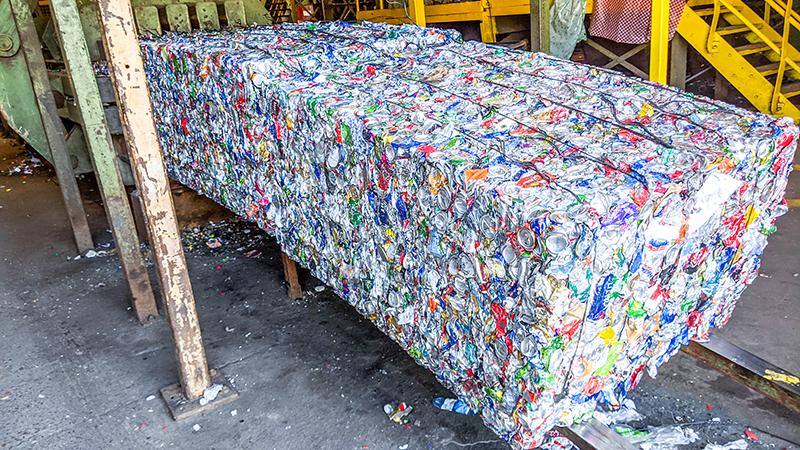 A bale of aluminum cans is almost finished with the recycling process at TFC Recycling last week.

On a recent morning, the Tidewater Fibre Corporation Recycling’s Chesapeake facility was humming loudly with activity.

TFC’s trucks make their rounds through Suffolk, going through the denser, more populated areas and then accumulating windshield time in the less dense, rural areas where pickups are more spread out. Then the recycling is brought to its facility.

From there, the trucks coming in are weighed and sorted on the scale, then they go to the tipping floor where a loader picks up what’s there and puts it into a tub, which holds a couple of truckloads full of recyclables. They get churned up before going into the conveyor system.

About six human pickers take out things that will harm the machines, such as plastic bags.

Following that, the cardboard gets separated from the paper through its machinery, and the bottles and cans fall down to another part of the conveyor system.

Benedetto said there is a joke in the industry that the recycling system could probably run without people if people put the right material in the recycling bins.

A big driver of costs, he said, is to remove things that the machines are not able to do.

From there, everything gets baled and sold to different markets.

With about five tons of material in each truck that comes in, TFC processes about six trucks — 30 tons — per hour.

There are two, eight-to-10 hour shifts for the 300 employees, along with temporary employees, who work at the 12-acre site. Maintenance happens in between shifts and on weekends, and the company uses compressed natural gas vehicles in its truck fleet.

As he passes a bale of plastic milk jugs, Benedetto points out that the price they get for those is, for the first time, more than aluminum cans.

“It’s been a blessing in many ways,” Benedetto said, “not so much (with) throwing tariffs on the aluminum cans, so we’ve got countries that are dumping aluminum into the U.S., which is artificially driving down the price, but there is a commitment by a manufacturer to use more recycled content, so they’re buying a lot of these, which has created a nice demand.”

The bales then go onto a 40-foot container that can hold roughly 56,000 pounds.

Pointing to one such paper bale that is heading to India, he said despite the company’s best efforts, those bales still have traces of materials that can’t be recycled.

“It’s not 100 percent pure, never is, never will be,” Benedetto said. “There’s always a little bit of plastic here and there, even with all of our efforts. But it’s not really a problem for the manufacturers we sell to, it’s more a problem for the governments.”

He said India will clean up and turn the recycled material into product that China thinks it can use, and then it ships back the product to the United States.

“You’ve got a willing party on that side and a willing party in the United States to try and do business, but the government is saying, you’ve got 0.5 percent plastic bags coming into our country, that’s a problem,” Benedetto said. “Yet they don’t mind sending us things like a cell phone, then saying we won’t take the plastic back.”

Benedetto said he wants Suffolk residents to understand that TFC is committed to recycling, and it is still recycling in spite of the fiscal and logistical challenges.

“It is being recycled,” he said. “That is what we want people and cities to understand that the process is still working, just at a lower price.”