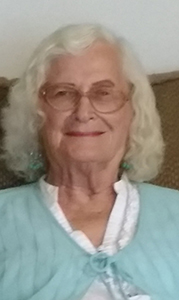 Rachel was a daughter of Edgar and Frona (Henderson) McGaha, born in the hills of East Tennessee on June 20, 1931. Her impoverished family was removed from the mountains to eastern North Carolina in the 1940s, and she struck out on her own at a very young age to Virginia. She worked in many of the restaurants of the Suffolk area for years. In the 1960s, she worked for a time at the General Electric plant in Suffolk. In her later years, she painted houses and practiced photography to a professional level. She was a fixture in the Nansemond Gardens community in Suffolk for 44 years.

The family will receive friends from 6 to 8 p.m. Thursday, Jan. 23, at Smith & Williams Funeral Home, Kempsville Chapel. A funeral will be held at 11 a.m. Friday, Jan. 24, at the funeral home. Graveside services will be private.

Rachel loved flowers, but in lieu of flowers, memorial contributions may be made to the Alzheimer’s Association.