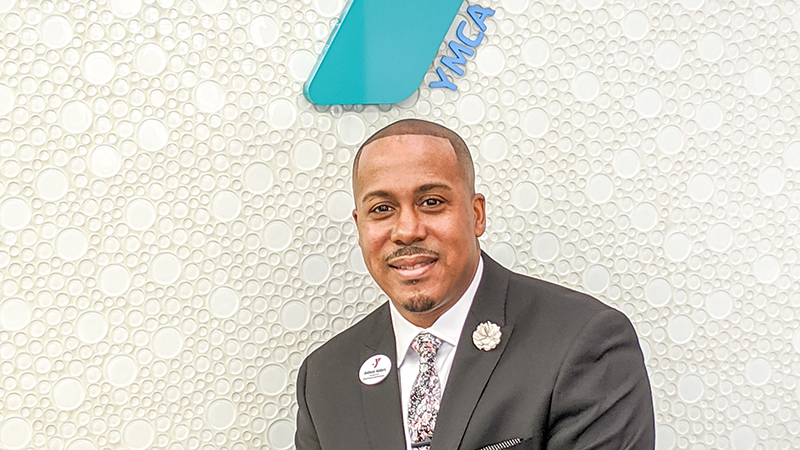 Anthony Walters, the new president and chief executive officer of the YMCA of South Hampton Roads, said he has a soft spot for Suffolk and wants to increase access to the Y, especially for those who need financial assistance.

The new president and chief executive officer of the YMCA of South Hampton Roads has a soft spot for Suffolk.

“I’m intimately familiar with the school system there, I taught young people there … I remember young people that were coming across the tracks there in Suffolk to the middle school,” Walters said.

He succeeded Billy George, who had been the chief executive officer for the previous seven years and prior to that had served as chief operating officer for 20 years.

Walters, who had been the organization’s chief strategy officer since 2017, recalled that teaching middle school students was more difficult, especially with behavior, interpersonal skills and students paying attention in the classroom. He said that leads back to the Y’s direction for a new strategic plan that focuses on character development. While he still wants its programs to help with academic achievement, including ensuring reading comprehension doesn’t get lost when a child is not in school, character development will have a prominent focus.

“In our new strategic plan, we’re hopeful that we can improve character development,” Walters said, “because we feel like that’s an important component to partner with teachers, to say, we can help you before and after school, with sharing better, having young people share better, having young people understand how much they have alike instead of their differences more, then it prepares them to embrace and accept the classroom environment a little better for you as a teacher.”

He said that’s something that would have helped him as a student teacher.

“From a character standpoint, learning about faith, learning about respect, responsibility, honesty, those traits can’t get lost in the society that we’re in,” Walters said. “Otherwise, it’s going to be harder for our teachers to teach the content.”

Walters, who was appointed chief executive officer last August and took the helm Dec. 2, has already moved quickly to identify his top five priorities for the region’s YMCA facilities, which serve more than 250,000 people throughout the region spanning Coastal Virginia, the Eastern Shore of Virginia, northeastern North Carolina and west to South Boston and Halifax County.

The priorities, or resolutions as Walters has referred to them, include child protection and safety, customer service excellence, member experience, resource collaboration and military initiatives.

At the Suffolk Family YMCA on Godwin Boulevard, its child care sites there and at schools serve more than 1,000 children daily. It has 2,660 families, representing 8,837 people, as members. Even with it being one of the larger YMCAs in the South Hampton Roads footprint, Walters wants to increase program development and the number of people using the facility.

He plans to work to evaluate the YMCA’s service delivery model to ensure that programs meet the needs of communities in South Hampton Roads, including Suffolk. He emphasized its partnership with the Obici Healthcare Foundation in trying to open its doors to people who can’t currently access it, and said there are other fundraising initiatives on the horizon.

Walters also stressed its partnership with Suffolk Public Schools, one that brings personal trainers into schools to work with teachers, bus drivers and other staff members.

Walters, too, noted the curbside appeal of the YMCA in Suffolk, but said there are still too many people who can’t afford the YMCA. He said it needs to raise more money to help lift those barriers and raise the awareness that it has those resources for people. More than 30 percent of member families across South Hampton Roads receive financial assistance.

Walters wants to increase the number of children in its before and after school programs in Suffolk, and while it has expanded its wellness operation and increased its space and equipment, he’s looking for more, and the organization has had conversations with the Obici Healthcare Foundation on how they can continue to work together.

While Walters has myriad responsibilities in overseeing the YMCA’s footprint across South Hampton Roads with its $54 million portfolio and $103 million in assets, he plans to keep his eyes on Suffolk.

But Suffolk’s YMCA is also a key component to the organization’s overall operations.

“Suffolk’s really important, the largest city in the state of Virginia,” Walters said, “and it houses one of our largest Y’s in our footprint, and I think it’s a really great symbiotic relationship between the two entities. It’s appropriate that we’ve reinvested in our Y to suit the needs of that city, and we want to be responsive to all the needs, and we want to galvanize people to really take ownership and volunteer for their Y and make it their own.”