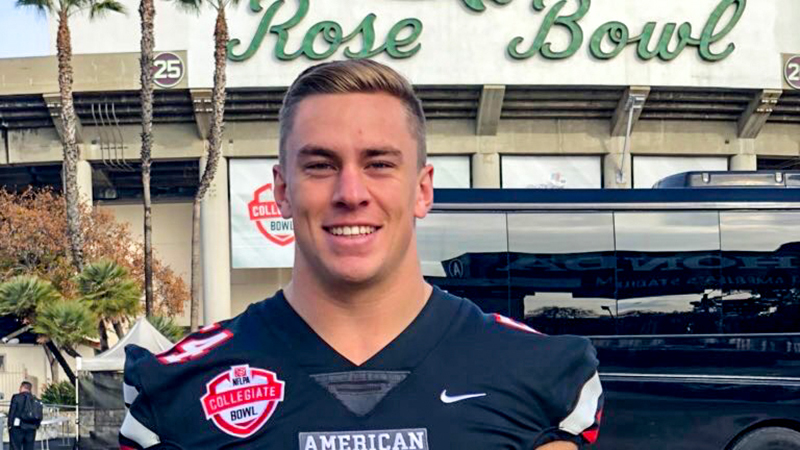 The NFL Players Association Bowl, which features some of the best seniors in the country for college football, was played last weekend in Pasadena, Calif. Christiansen was chosen for the game last month, and he knew coming in it would give him an opportunity to work with NFL coaches.

Heading into his senior season, Christiansen, who goes to the U.S. Military Academy at West Point, said he would welcome any opportunity to play in the NFL. Players who attend service schools previously were prohibited from pursuing professional sports careers due to their service commitment.

That rule often saw players from schools like Army, Navy and Air Force handle their service commitments for a few years and then pursue pro careers, which was difficult. But last year, a rule was passed where a waiver could be granted to those pursuing pro careers, which could almost certainly benefit Christiansen and those to come after him.

Christiansen played for the American team in the NFLPA Bowl, where he finished the game with five tackles and a fumble recovery he returned for 16 yards. It was a solid showing for the Suffolk native, who was deemed a standout during the practice week leading up to the game. During the week, he said he needed to have the best practices of his life and best game of his life to show the scouts what he can do. He felt good about what he had done.

“I felt like I practiced and played very well,” he said. “I learned so much about the game and my position, specifically both from coaches and the guys around me.”

The former NSA standout finished his senior season with 112 tackles to go along with 2.5 sacks. He is a two-time captain at Army and a three-year starter. As he prepares for the 2020 NFL Draft in April, he will be working out at school with Army’s new combine coaches and in New Jersey at Test Combine Prep. Christiansen is hopeful to get an invite to the NFL combine, which will be held in late February.

At NSA, Christiansen was a two-time State Defensive Player of the Year and a state champion in 2015.