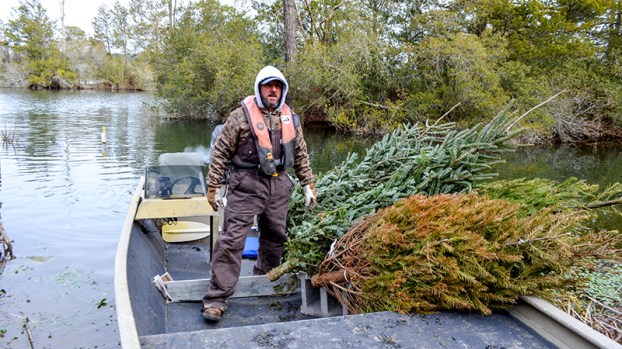 Fishin’ around the Christmas trees

The smell of evergreen was thick around the boat ramp at Lone Star Lakes’ Butler Tract in the early morning cold, as men from Suffolk Parks and Recreation and the Virginia Department of Game and Inland Fisheries tied about 100 trees to cinderblocks with braided nylon rope. The trees were then transported by boat and dumped at both shoreline and offshore fishing spots in the Butler Tract lake.

VDGIF is doing this project to create fish habitats in Butler Tract, providing shelter for young fish against larger predators.

It will also be a boon for fishing in the 65-acre shell marl lake, which is “the most popular fishing destination at Lone Star Lakes Park,” according to Park Superintendent J.R. Ruggiero.

These new fish habitats will help anglers there, including those fishing from the pier, Ruggiero said.

“It’s going to provide habitat accessible by shore, for the anglers who do not have a boat,” he said. “They fish from the pier. Now they have habitat for the fish to hold in and live in, which makes it easier for them to catch.”

At Lone Star Lakes Park, these trees will take about six months or so to become waterlogged and start to sink, according to Chad Boyce, district fisheries biologist for VDGIF.

“The characteristics of this lake are generally steep-sided, with very little structure,” Boyce said, “so these trees add a needed benefit of habitat for juvenile fish, to have places to hide and avoid predation from larger fish.”

The primary species in the lake that will benefit from this project are largemouth bass, bluegill, white perch and the redear sunfish — also known as “shellcracker” — “by creating areas for those fish to have refuge, so they’re not all consumed by the predatory fish,” Boyce said.

These fish habitats are one of the two main uses for these Christmas trees in the region after the holidays, according to Boyce. Other trees are used for dune replenishment for beaches in places like Back Bay National Wildlife Refuge and False Cape State Park in Virginia Beach.

Lone Star Lakes Park is located at 401 Kings Highway. No permit is required to fish at this park, but a valid Virginia Fishing License is required for persons aged 16 or older.

Mr. Peanut, an internationally known marketing icon and Suffolk native, died Wednesday after courageously sacrificing himself for his friends after... read more