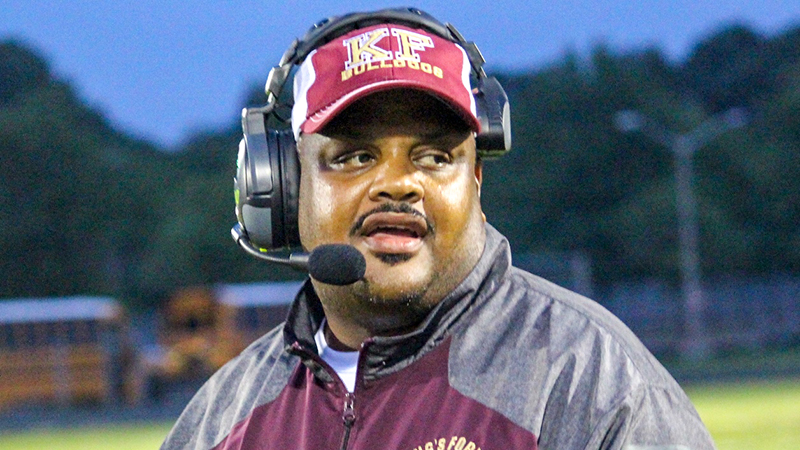 Kermit Buggs is stepping down from his post as the head coach for King’s Fork High School football after one season. (Matthew Hatfield Photo)

The King’s Fork Bulldogs will be searching for a new head football coach for the 2020 season and beyond.

Kermit Buggs, who took the helm of the program last March after spending the five previous years as an assistant at Old Dominion University, announced his resignation this week.

Starting a bevy of underclassmen, the Bulldogs finished just 4-8 overall in the lone season under Buggs, though did show some promise in the postseason with a 25-8 upset of third-seeded Warhill in the Region 4A playoffs. They also led second-seeded Churchland 8-6 at halftime in the regional semis before ultimately falling.

“It was a great year for us just getting started. I thought we did some things well. We didn’t get as far as I wanted us to get in the playoffs, but I thought we did a good job of upsetting Warhill and challenging Churchland,” Buggs said.

“We had a meeting earlier in the week to let them know that I would be moving on. For me, it’s just a personal decision to move on for another coaching venture. It’s a little bittersweet situation, but I’m also excited about what I have coming down the pike.”

Buggs began his coaching career at Surry County, where he guided the Cougars to a perfect 14-0 record and state championship in 1999. While also serving as the school’s head basketball coach at the time, he led the Surry football program to a 34-14 record over a five-year stretch, which also included a regional title in 2000 and a trip to the state semifinals in 2002. During his time there, he received both Region A Coach of the Year and Virginia High School Coaches Association State Coach of the Year honors.

Before that, he played football at Norfolk State University and was the recipient of the Vince Lombardi Award for Leadership and Academic Achievement in 1992-93 upon graduating as the Spartans’ all-time leading passer.

In addition to his time at ODU, Buggs had other college coaching stops, most notably spending nine seasons under the late Joe Paterno. He was on Penn State’s staff when the Nittany Lions defeated Florida State in the Orange Bowl in January 2006. Buggs also coached at Lock Haven University and the University of Connecticut.

Although Buggs wouldn’t disclose his next destination, it appears that a return to the collegiate coaching ranks may be a distinct possibility. In the meantime, King’s Fork begins to look for a new coach – their fifth since the school’s inception in 2004.

“It’s going to be a great situation for whoever steps in,” said Buggs. “There’s going to be a great young quarterback here. Most of the defense is back, including all four linebackers and the whole defensive line. The only thing they have to replace is the secondary and a couple wideouts. Everything else is pretty much set in place. There’s a great foundation here for somebody to come in and do an excellent job.”