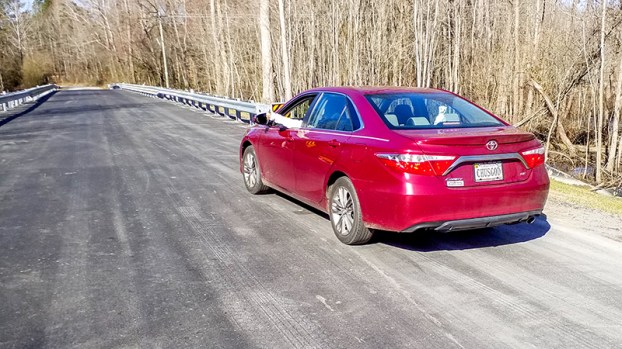 After six months of repairs, the 91-foot Jones Swamp bridge on Mineral Springs Road and the adjacent road have been reopened.

Drivers had to detour around the construction of the dual projects during that time, but as of last week, with a soft opening of the reconstructed span and road, it is back open again.

On the east side of the bridge, there was a rural drainage improvement project, where the road was physically raised up with fill material, according to Public Works Director L.J. Hansen.

He said pipe went in to accommodate the drainage. With a little bit of a peninsula in that area, if no pipe was put in, Hansen said it would have created some erosion issues.

“It did actually bring that road up and that makes it more reliable during weather events,” Hansen said. “Now, we’re not saying it will never flood again. That’s probably not the case, but between the two projects, we believe that we’ll see a far reduced frequency of the number of times that it will flood.”

Hansen said before the project, it was regular to see flooding in that area about one to two times per year.

The old bridge span, which was built in 1955, was about 91 feet long and 22 feet wide. It was structurally deficient and in poor condition, according to a November 2017 inspection report.

Though Hansen did not have the exact numbers available, he said the bridge is slightly longer, wider and higher following the repairs.

The steel and wood bridge was replaced with concrete, and he said during the construction work, the number of piers was reduced to support the bridge, which will allow more water to flow through from one side to the other.

“We’ve opened up that span between there to let the water flow from one side to the other,” Hansen said. “All of those things, we believe, will help it to keep from flooding as often as it has.”

Hansen said the bridge work cost close to $2 million — the bridge cost of about $1.25 million, and the road repair alongside it about $600,000. It was funded through two different types of funding: the rural drainage improvement project was paid for through a combination of local money and Virginia Department of Transportation revenue share funding, and the bridge project was paid for from a combination of State of Good Repair federal funding and VDOT maintenance funds.

Another city bridge on Old Mill Road between U.S. Routes 58 and 460 is currently undergoing repairs and still has several months to be completed, Hansen said, with others upcoming in the next two years on Nansemond Parkway, Carolina Road and Longstreet Lane.

Though the Mineral Springs Road area is not as heavily trafficked as other parts of the city, Hansen said the project has been an important one to residents and people who use that area on a regular basis. He said the work will allow the bridge to last many more decades and is hopeful that a more reliable structure there will minimize maintenance and upkeep needs.

“For the southern and western parts of the city, Mineral Springs, it’s an important corridor. It carries a lot of people, farm equipment and all types of stuff. It’s an important road, and it’s important to us.”

The Suffolk Center for Cultural Arts is inviting everyone to an evening of “Mardis Gras: Arts in the Big Easy,”... read more