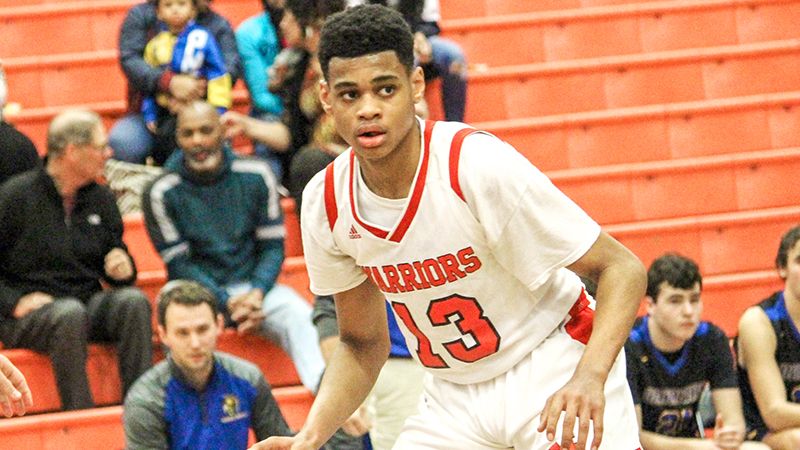 Participating in Session 2 of the 12th annual VirginiaPreps.com Basketball Classic at Churchland High School in Portsmouth on Saturday, the Nansemond River Warriors knew they had their work cut out for them. Their opponent, the Western Albemarle Warriors, came in with a record of 12-4 overall.

Yet, even being at a size disadvantage, Nansemond River was able to lead for a majority of the contest, only to go cold down the stretch and fall 54-49.

“Overall, we executed well at the beginning of the game. Coming off a 30-point loss to Oscar Smith less than 24 hours before, I wasn’t sure what type of team would show up,” said Nansemond River coach Ed Young. “Western Albemarle executes well, they don’t make a lot of mistakes and we don’t do well against those kinds of teams. But we hung right there with them the entire game.

“We were up five in the fourth quarter, but I didn’t feel comfortable. What got me was we were up 38-31 and we turned the ball over four out of five possessions. That killed us. That right there was pretty much the game because when we turned it over, we didn’t go down and defend particularly well either. They were getting easy buckets.”

Trailing 13-12 after one quarter of play, Nansemond River would go on a spurt in the second period to take a 24-21 halftime lead. Senior Justin Fatherly — who surpassed 1,000 career points the night before — and junior Jakari Joy paced their attack.

Fatherly scored 26 points on 12-of-24 shooting and had four steals, while Joy tallied 12 points. Outside of them, the Warriors had trouble manufacturing points, committing 14 turnovers with only five assists and going 2-of-6 from the free-throw line.

“We have to score points, because we’re not a great defensive team. I think we average right around 72 a game, and we weren’t near that in this game. Justin has had a heck of a year, averaging right around 27 a game, and we’re thrilled for him going over 1,000. He dominates our offense, which we understand and I don’t have an issue with that at all,” Young said.

“It was nice to see Jakari do what I was hoping he’d do all year in getting right around 12-13 points. We’ve had guys like Luke Williamson and Trey Chapman step up at times, Myron Brown inside, but not enough consistent scoring options to complement Justin for us to beat some of these better teams.”

Western Albemarle did its damage in the paint, with Hood College commit Tommy Mangrum scoring most of his game-high 31 points around the basket. Henry Sullivan teamed with him along the baseline, posting 12 points and 10 rebounds.

“We’re not a power offensive team like some teams I’ve had in the past where we can be down 11 or 12 and it’s not a big deal,” Young said. “We have to execute, rely on each other and stick to the game plan, because it works. When we get out of character, it hurts us and it shows.”

With the loss, the Warriors drop to 7-8 overall with pivotal Southeastern District games against Great Bridge and Indian River this week that they need to win to put them in better position for a postseason bid.

“The way I look at it, out of the 10 slots, about eight are pretty solid. There are probably two spots left and we’re battling about four or five teams,” Young said. “Every win is major. Being one game under .500 with February coming up, we’ve got to win some games and hope people lose, but we can’t control that part.”