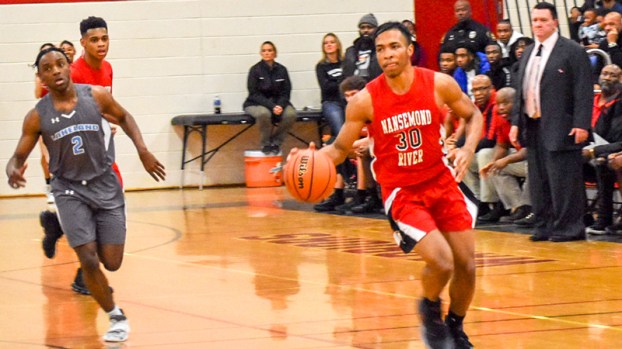 Fatherly has been having a strong season for the Nansemond River boys’ basketball team this season. Coming into his senior season, Fatherly was going to assume the No. 1 role on the team after working his way to that in the latter part of his junior season as he helped the Warriors reach the regional playoffs.

This season, Fatherly has put up impressive numbers so far, averaging 27 points per game, including multiple 30-point games, and has scored 40-plus points twice this season. Against Oscar Smith last Friday, he scored 29 points to put him over the 1,000-point milestone. With a 35-point game against Great Bridge High School Tuesday night, Fatherly could surpass 1,100 points over the course of his next two games.

“It’s great to achieve that, but there is more work to be done,” Fatherly said.

He knew coming into this season he’d have a chance at eclipsing the honor, but his main goal was to help his team win games to help them get back to the playoffs. Fatherly was also among the McDonald’s All-American finalists’ nominations for the state of Virginia, which included 17 other seniors.

“It’s a blessing to get that type of recognition,” Fatherly said. “It’s just the result of all the hard work I put in throughout the summer, fall and now in the winter during the season.”

Fatherly’s coaches and teammates were equally excited for him to surpass the 1,000-point milestone.

“Justin has worked hard to get to this point in his career,” Nansemond River Coach Ed Young said. “He wants to get better. He shows the work ethic it takes. He has separated himself from those that talk about being good or the best and actually working toward it. He does well in the classroom and has never been a discipline issue. We still have a lot of season left here, but as I said, I believe Justin will get better at the next level and could possibly play beyond that.”

Fatherly has gotten some interest from Division I schools such as Longwood University and UNC-Asheville, and some Division II and Division III schools as well.

The Nansemond-Suffolk Academy girls’ basketball team remains ranked No. 2 in the state poll. At 13-3 on the year, the... read more