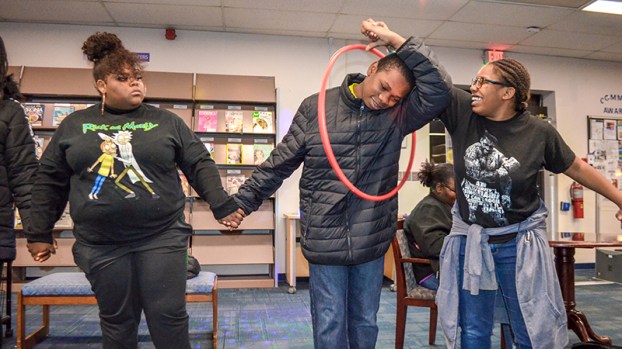 Jonathan Williams, 14, tries to maneuver a hula hoop around his body without breaking the hand-holding circle at the Suffolk Public Library “Winter Teen Lock-In” on Friday. Also pictured are Precious Wilson, 14, and Kanetria Williams, 17.

Teenagers broke the ice on Friday night with a hula hoop and relay race at Morgan Memorial Library.

Suffolk Public Library staff had icebreakers for the attendees of its inaugural “Winter Teen Lock-In” in the downtown library branch Friday evening. The first one had the two-dozen-or-so teens hold hands together in a circle for a game of “Octopus,” using a hula hoop and lots of shimmying, shaking and teamwork.

“The game consists of a team-building activity of the hula hoop passing through each personal body, without breaking hands. If you break hands, you’re out,” said Library Associate Lakecha Green. “It’s teaching each child to work together as a team, by helping the next individual get the hula hoop across to the next person.”

Another icebreaker had the teens split into two teams, with pairs from each team racing from one tape marker to another and back again in the Morgan Memorial lobby. The catch was that this was a “balloon” relay race, and the balloon in question was behind the backs of each racing pair.

“You start from one end of the tape, and try to get across the other end without dropping the balloon. If you drop the balloon, as a team you have to take the balloon back to the beginning, and start all over again,” Green said.

The “Winter Teen Lock-In” was for teens ages 14 to 18, with DJ music, a video gamers lounge, “Minute 2 Win It” challenges and raffle prizes. Teens enjoyed pizza, Chips Ahoy and more snacks in a safe space for them to have positive interactions with their peers.

“It’s really to provide a safe space for teens to promote positive social interaction. A place where parents can trust to drop their kids off after hours,” said Teen Services Senior Librarian Asa Heyward. “One of the main areas of development for teens is social and emotional development. That’s why we’re providing that.”

Siblings Kanetria, 17, and Jonathan, 14, Williams enjoyed the “Octopus” shenanigans, plus the gamers’ lounge with their peers.

“It’s good and fun to talk to people,” Kanetria said, specifically other teens.

There was also a VIP Lounge area at the event for the library’s summer 2019 interns and teen library influencers, who were “instrumental” in coming up with the various lock-in activities, Heyward said.

“This is a lock-in that was made for teens, and is our first lock-in that was inspired by teens,” Heyward said. “It’s really our goal to have our teens be part of the planning process, so they can have a stake and sense of ownership in the library as a whole.”

Andrew Steiner, 15, was one of the library’s summer 2019 interns who assisted at the event. He said he had a fun experience at the library over the summer, meeting new people and learning how the library works, and that he was pleased with the Friday night turnout.

“I would say that, by the number of people that are here, we succeeded,” he said.