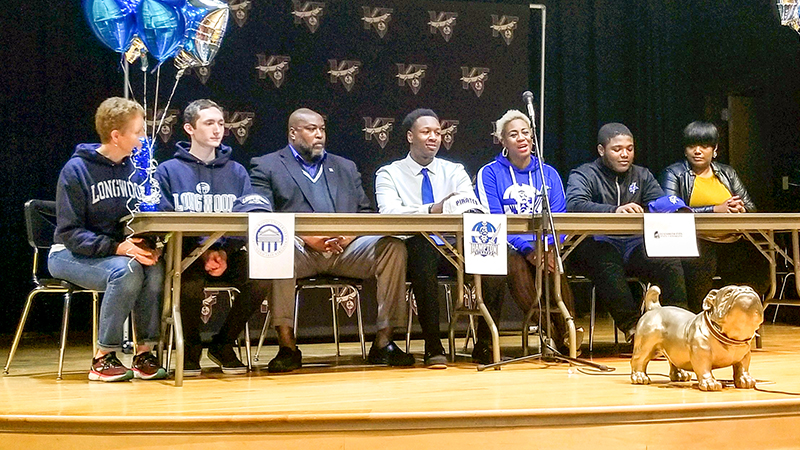 Jack Van Straten, DeVaughn Orr and DeAndre Taylor all signed National Letters of Intent to compete at the next level. (submitted photo)

Orr recently committed to HU, citing the relationship he had with the coaches and feeling like it was the best fit for him. The Bulldog player was one of the more sought-after seniors in South Hampton Roads, reeling in multiple Division I offers before deciding on Hampton.

Taylor will head to Elizabeth City, where he will go to play football in the Central Intercollegiate Athletic Association. The senior said Elizabeth City felt like home to him. Also, he feels like Elizabeth City will give him a good chance to step on the field during his freshman season.

“When you make decisions like this where you’ll be away from home, it has to feel like home, and to me, I felt like Elizabeth City was home,” Taylor said. “They are giving me a chance to play as a freshman, but I have to earn it.”

Van Straten had an impressive senior campaign back in the fall and knew running in college was going to be a possibility. He went on an official visit to Longwood last fall and liked what Longwood had to offer for him academically. Also, during the visit, Van Straten felt like he connected well with his future teammates. Running at the Division I level will be a good opportunity for Van Straten.

“Running in college at whatever level had always been a goal of mine,” Van Straten said. “The fact that Longwood is Division I is a bonus.”