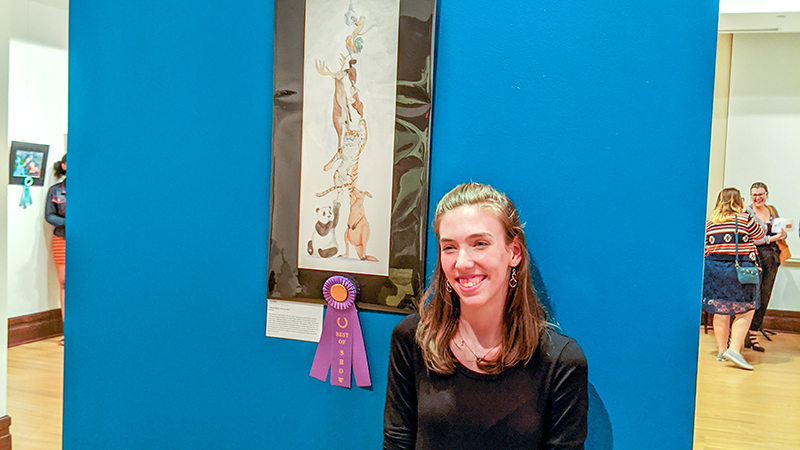 Lily Kirk said as she thought about her entry into the Suffolk Sister Cities International’s 32nd annual Young Artists and Authors Showcase, she wanted to veer away from people in her creation and use animals for her inspiration instead.

It turned out to be a good idea for her watercolor-and-ink creation, “Out of Many, We Are One.”

So good, in fact, that the 16-year-old Nansemond River High School junior earned best-in-show honors at the showcase’s awards ceremony Thursday at the Suffolk Center for Cultural Arts.

“I was thinking about the joke, how many people does it take to change a lightbulb,” Kirk said. “I was like, yeah, they could change a lightbulb. It can be the world, them changing the world. I thought it was a good idea. I guess the judges did too.”

The entries for the artists and authors taking part in the show had to be done with the theme, “One World: Out of Many, We Are One,” as the focus.

Bruce Spiro, Suffolk Sister Cities International president, praised the quality of the students’ work as featured in the gallery as “truly remarkable,” Students submitted a record 200 entries into the showcase.

“It indicates the growing interest and popularity of the program,” Spiro said.

Said Linda Doland, co-chairperson of the showcase: “We had a banner crop of entries this year.”

Mayor Linda T. Johnson, who helped present the awards, said the event showcases the youth of the city.

“This is just a very, very special evening,” Johnson said.

Eddie Velez, who earned first place for his drawing, “Out of Many, We Are One,” said he used his friends as inspiration for an entry that took him about three to five hours to complete, though setting up how each person represented in his piece was going to be positioned took a bit longer.

The 16-year-old Nansemond River High School senior used pens to draw most of it, then colored it all with a Sharpie.

Velez also had the distinction last summer of having the winning design out of more than 2,000 entries for the cover of the game programs for the Norfolk Tides minor league baseball team.

For 17-year-old Lakeland High School senior Orion Oliver, he wanted his painting, “Nation Tree,” to capture the beauty in nature, with the people being the seeds for the tree. The painting took him out of his element somewhat, as he prefers drawing.

“I just wanted to show that, other than just different countries, there’s also different kinds of people within those countries that are separate, but they shouldn’t be separated,” Oliver said. “They’re all people. They’re all united as one.”

However, he said if he had drawn it instead of painted it, the idea he wanted to express in the piece would not have come across as well.

“Since a lot of humans, they have a lot of great ideas, and we’re all so different, and we have a lot of different experiences,” Oliver said, “it’s good that we’re able to come together, and it’s a beautiful thing that we can all come together and bring all our thoughts and ideas together.”

First place: Eddie Velez, Nansemond River High School — “Out of Many We Are One”

Third place: Dylan Key, Forest Glen Middle School — “One World: Out of Many, We are One”

Lily Kirk, Nansemond River High School – “Out of Many, We are One”