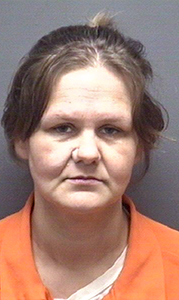 A woman has been arrested on multiple charges following her indictment by the grand jury last month.

She has been in custody at Western Tidewater Regional Jail since her initial arrest Oct. 4.

Authorities responded to the residence in the 3200 block of Deer Path Road following a complaint to Child Protective Services, according to a city press release. Two juveniles were found to be living in unsanitary conditions, the press release stated.

The children were placed in the custody of a family member, and the residence in the 3200 block of Deer Path Road was condemned, the press release stated.

Shortly after, Suffolk Animal Control responded to the padlocked residence and could hear a dog barking inside. Multiple cages holding rats and a bearded dragon were located inside a garage and under a trailer. None of the cages had access to food or water, nor did they provide adequate space and shelter, the press release stated.

A family member responded to the scene, and a total of 160 rats and the bearded dragon were surrendered and later turned over to a rescue group. The dog was determined to be in good health.

This is not the first time Harrell has been in trouble with Animal Control.

According to an online court records system, she was found guilty in 2016 of four counts of providing inadequate food, water or shelter and given 10 days to serve. The rest of her sentence was suspended.

Animal Control officers also responded to her house in 2012 because of dogs running at large. Five of the dogs were found to belong to Harrell, according to a city press release, and there was inadequate food, water and facilities for them. Harrell was charged with 14 crimes. She was found guilty of five of those crimes later in 2012 and given suspended jail time.

In 2009, Harrell was charged with animal cruelty due to horses that belonged to her found tied up to trees in the woods, with others roaming free nearby. All were undernourished and suffering from skin infections, and one had to be euthanized. For those charges, she was ultimately convicted of 10 counts of animal cruelty, given suspended jail time and ordered to keep only one domesticated animal and one livestock animal.