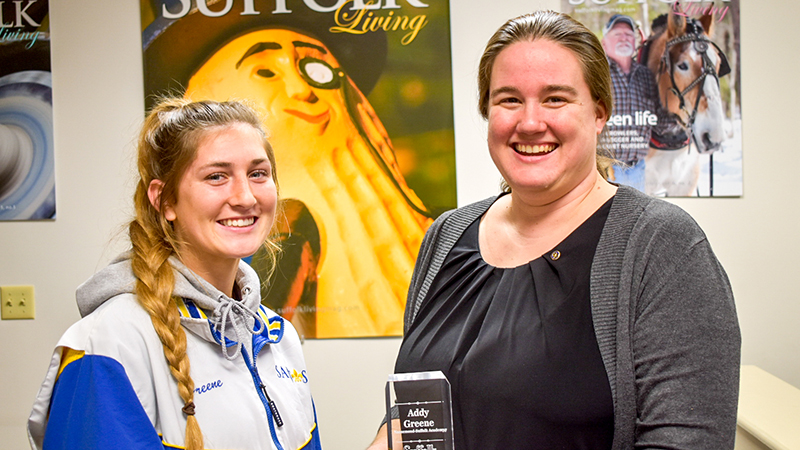 The fall season of the 2019-2020 school year was filled with some strong individual performances, but Greene and Evans were among the top. Greene takes home the SNH Fall Female Player of the Year honor for the second time in three years, while Evans made his one season playing for a Suffolk school an unforgettable one.

Greene capped her fall season by earning Conference Player of the Year honors while also earning a first team All-State selection for the NSA volleyball team. Greene was essential in helping NSA win both the Tidewater Conference of Independent Schools regular-season crown and conference tournament crown. That paced NSA for the top seed in the Virginia Independent Schools Athletic Association Division II playoffs. Though the Lady Saints fell just short of a state title, it was a major season for Greene.

Also during the season, Greene was able to surpass the 1,000 milestone mark for her career in both digs and kills.

Evans transferred into Nansemond River after previously being at Deep Creek High School. The Warriors standout running back made an immediate impact for the Warriors, finishing with more than 1,700 yards and 20-plus touchdowns. He was an anchor for a Warriors rushing attack that averaged more than 300 yards per game. He had multiple games where he rushed for 200-plus yards and multiple touchdowns.

Nansemond River finished with a Suffolk’s best 8-2 in the Southeastern District this year. They went into the Class 5A region playoffs with the sixth seed and upset the third-seeded team in Indian River High School.

Not only did Greene and Evans have impressive individual seasons, but they always give credit to teammates and coaches along the way. Their individual play was essential to the team’s success for this season. As seniors, both have plans to do big things at the next level. Greene, who is a two-sport standout, will head to Virginia Tech to play softball, while Evans is still sorting through his options.