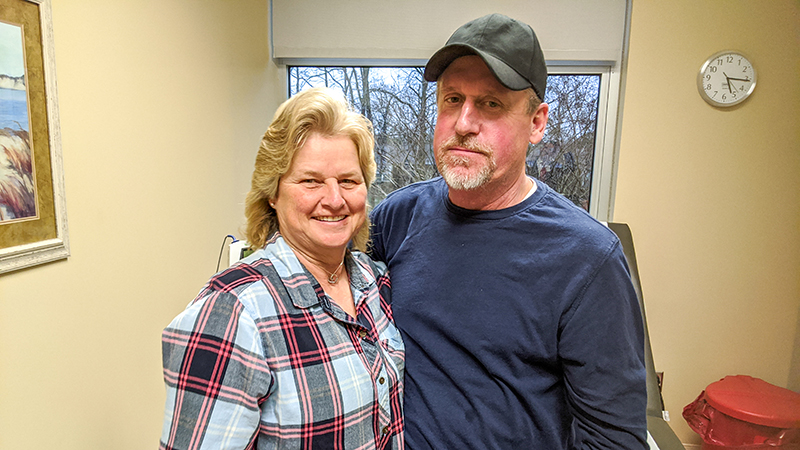 Rebecca Branham used CPR to save the life of her husband, Joseph Branham, on Nov. 19, 2019 after he suffered a heart attack in their Hosier Road home.

The months before Joseph Branham suffered a heart attack and his wife, Rebecca Branham, performed life-saving CPR on him had been filled with excitement and change.

In May 2019, the couple bought a house together and got married May 25, 10 days after he retired from the city of Portsmouth after 35 years. In the same month, he had also received a clean bill of health — other than high blood pressure — following a complete physical.

The following month, he watched his granddaughter graduate from King’s Fork High School, and, not wanting to be idle in retirement, began working for FedEx. As part of his job, he was required to lift heavy boxes, but other than some fatigue that he associated with the demanding physical labor, he felt fine.

“I felt great,” he said. “I was picking up those huge boxes and everything, and I thought everything was good. I didn’t have a cold. Yeah, I was tired from working all the hours, coming home. I thought it was just exhaustion.”

The evening of his heart attack, Nov. 19, was like many others for the newlyweds. The two got off work and went to their home on three acres off of Hosier Road and had dinner — on this night, air-fried chicken wings and mac and cheese on the side.

They went to bed around 8 p.m., where they went to watch TV before falling asleep.

“All of a sudden he jumped out of bed and gasped for air,” Rebecca Branham said. “I was like, what is going on? What’s the matter? I was yelling at him, but he wouldn’t reply to me or anything.”

He staggered out of bed toward the bathroom, with his wife following closely, and stood at the toilet before collapsing on the floor.

“You better not leave me. You better come back to me,” she called out to him as he collapsed. “You’re not doing this to me right now.”

But because of training she had through her employer, Alexander’s Contracting Services, Rebecca’s instincts kicked in, and she began performing CPR on her husband for a couple of seconds before going to get her phone to call 911 and continuing with the CPR.

In the beginning, Joseph Branham didn’t make a sound as his wife continued to perform CPR. Later as she continued, he started moaning, and, roughly 10 and 15 minutes later, police and other first responders from Station 3 arrived.

“I was calm, I did what I did, and then when the policeman got there and I went to the door and they came and put the defibrillator on him, that’s when I broke down,” she said. “I just lost it.”

Joseph Branham didn’t speak until first responders had arrived and continued the life-saving efforts his wife had started.

His first memory after his heart attack was when paramedics were transporting him to the ambulance as they took him to Bon Secours Maryview Medical Center in Portsmouth.

En route to the hospital and once there, he would suffer three more heart attacks before Dr. Bhavdeep Gupta performed surgery to clear up his 100-percent blocked artery.

Gupta talked to Branham the entire way to the operating room, making him feel comfortable, and said his wife’s actions were critical in limiting brain damage.

The surgery to open the artery was performed in less than 90 minutes, and four days later, Branham was allowed to go home wearing a LifeVest, a personal defibrillator for people at risk of sudden cardiac arrest.

“Fortunately, he recovered very well,” Gupta said. “We don’t see such a good and quick recovery of a cardiac arrest usually.”

Joseph Branham said his heart attacks were a rude awakening.

“If I do my part and then I go away from here, that’s not my problem,” he said, “but if I don’t take care of myself and let her down (pointing to his wife), let my grandkids down — because I want to see them get married — that’s my fault. I don’t want to go like that.”

Among the changes, he has mostly stopped eating fast food — although he admitted to eating some on a pair of days last week, with his granddaughter catching him in the act of getting a burrito from the Main Street Taco Bell on one of those occasions.

His diet now consists of air-fried or baked foods such as chicken, fish and turkey, as well as fruits and vegetables. He has also stopped drinking sodas and instead drinks water, coffee with no sugar and tea. It has made the couple religious label-readers at the grocery store.

“I feel like I’m going to the grocery store at Barnes and Noble,” she said.

“His heart definitely has damage, and he does not have a (completely) normal heart function,” Gupta said. “His heart is still depressed, but overall, his functional capacity is close to normal.”

“He’s the one that kept me going through all this other stuff, and I just opened up to him,” Joseph Branham said.

And though he was cleared to go back to work Jan. 27, the 57-year old hasn’t done that — yet. He’s nervous about slowing down the other people he worked with and trying to exert too much.

“I should not be here,” he said, “and with her doing CPR and me going through this, it’s a story that I really feel strongly about that needs to be told.”

The couple, who met at a city dog park on Sept. 24, 2017, as each was going through a divorce, describe themselves as soulmates. They have two rules in their relationship — they don’t go to bed mad at one another, and they don’t fight.

“We’ve always been close, but it’s closer this time, because I’m worrying about his health now,” the 53-year-old Rebecca Branham said, “and I want him around longer.”

Now, every time Gupta sees the couple, he looks at her and says, “There’s the hero.”

Quietly, in a near whisper, she answers: “I know.”