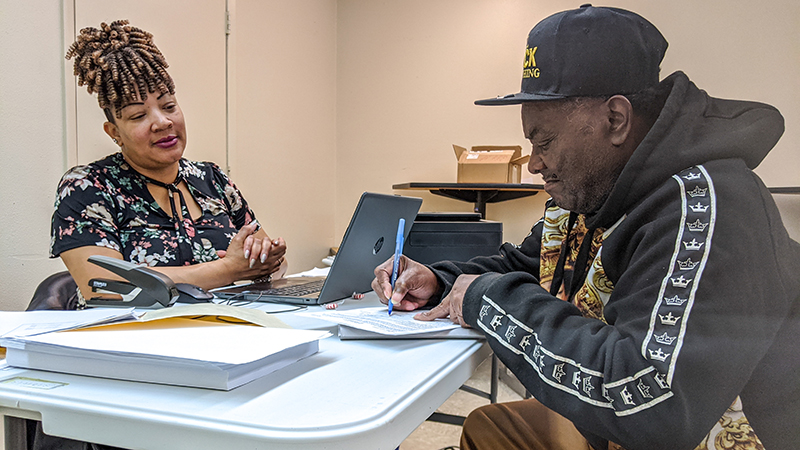 Residents of Parker Riddick Apartments have begun receiving Section 8 housing choice vouchers to relocate while the buildings there are demolished and rebuilt.

On Tuesday and Wednesday of this week, and on a pair of days last week, residents spent about two to three hours receiving an overview of the voucher process from Suffolk Redevelopment and Housing Authority staff while learning how much they would be able to afford as they look for a new place to live.

“We actually are moving forward, so it’s a good feeling on all ends,” Layne said.

Several members of the housing authority’s staff have spent time at Parker Riddick ensuring the voucher process goes as smoothly as possible and answering questions from residents.

“I have everybody here to ensure that we can service everybody,” Layne said. “It’s a smooth transition, and they’re inconvenienced as little as possible. I know it takes some time, but I think in the end they’re going to be very happy.”

The housing authority received federal approval to demolish and rebuild the 93-unit Parker Riddick Apartments and take on the substantial rehabilitation of the 113-unit Cypress Manor Apartments across from it.

The 206 total units will be converted to Section 8 project-based voucher assistance housing.

Layne said about 50 to 55 of the 77 families who currently occupy apartments in Parker Riddick have taken the housing authority up on the early-out program. The voucher amounts each family received will cover their rent and utilities.

“The closer that we get to the closing, probably sometime during the summer, we need to start emptying out units,” Layne said. “So what we did is offer them an early-out program, by which we’re giving them vouchers earlier than they would have gotten them.”

It gives people a head start on finding a new place to live. Layne said those with the vouchers can go anywhere in the United States to use them. The housing authority in the area where residents plan to relocate will inspect places for suitability and on whether it fits within the amount of the voucher given.

Residents also have the option of staying in another of the housing authority’s locations in the city. She said some have already found a new place to live, though others are just beginning the process.

“Right now, the process is just simply to try to get (the vouchers) issued, get them out there looking so that they’re not caught in that last minute rush,” Layne said.

Residents will get the first option to return to Parker Riddick, which will be known as White Marsh Pointe.

No one at Cypress Manor Apartments will have to be located, as residents will be shifted to other apartments while they are being rehabilitated. The brick frame of those units will be left intact while the interior is improved.

The work on both apartment communities is expected to begin this summer, with construction lasting roughly two years total, according to SRHA consultant Peter Behringer, a managing member of TCG Development Advisors LLC.

The first section of Cypress Manor will be ready within five months, and groups of buildings will be ready roughly every four months after that is completed.

Demolition work at Parker Riddick will start once all of its families have found Section 8 housing.

Layne said the agency is a bridge between the Parker Riddick residents and their future landlords.

“They just need to understand the process of how Section 8 works,” Layne said, “how it’s going to affect them as far as, now they have a lease with that landlord, what part we play because we now don’t have a lease with you, so now we deal directly with the landlord. It’s tying all those things together.”