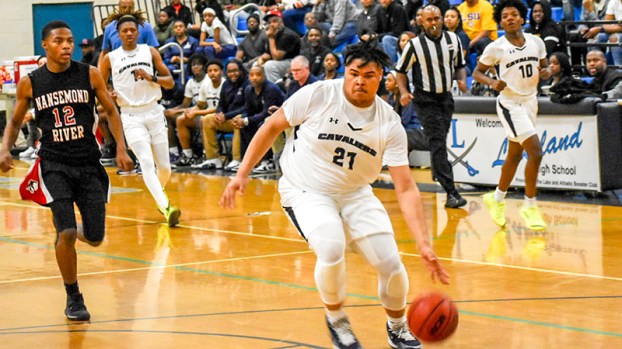 Tyshawn Allen looks to make a play for the Cavs. Lakeland will host New Kent High School in its first game of the Class 3A region tournament.

The Lakeland High School boys’ basketball will get their playoff run started this weekend when they host New Kent. Lakeland holds the No. 4 seed in the region, while New Kent holds the 13th seed.

“We have completed the first portion of our season, and it wasn’t perfect, but it had purpose,” Coach Clint Wright said. “We know it’s got to be a sense of urgency from the start. We know it’s not the regular season anymore. We know it is lose and go home, and we don’t want to have to do that.”

It will be critical for the Cavs to turn around their play after finishing the regular season winning only one of their last four games. Lakeland is 13-8 right now, but five of their losses have come by five points or less.

Lakeland has competed in the region tournament in each of the last two seasons but has won only one regional game. Those Lakeland teams were young, and Wright believes that the experience now will be beneficial for Lakeland as they prepare to go on their playoff run.

“The core group we have is still intact, and they are experienced,” Wright said. “We aren’t ashamed about the past and things that have happened to us, because we feel like that has helped shaped us for the team we are today.”

A key for Lakeland to not only defeat New Kent but also make a run in the playoffs will be the team’s free throw shooting and being in good position to play defense.

The Cavs are set to host New Kent at 7:30 p.m. Friday, but due to the weather the game will likely be pushed back to Saturday at 7 p.m. In case of a Lakeland win they will play in the second round at home again next Tuesday night as they will host the winner between Park View High School and York High School.

As the Nansemond River High School wrestling team goes to compete in the Class 5 state tournament, they could bring... read more