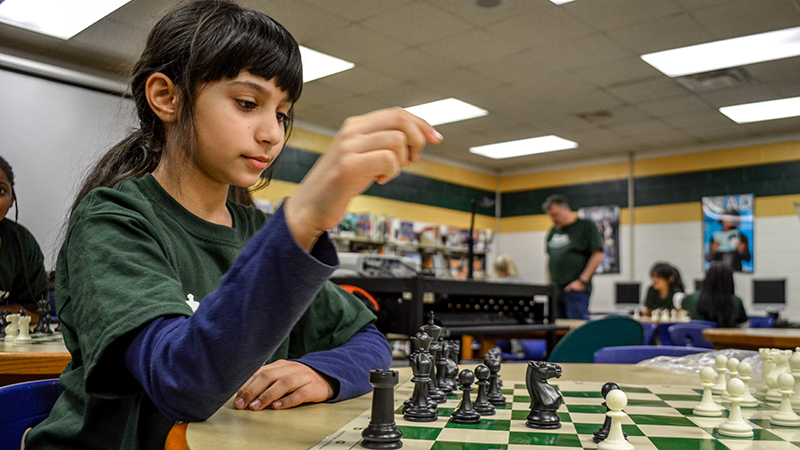 Students at Nansemond Parkway Elementary School are learning how to play chess in a new club at their school, and the club’s first competition is coming up this April.

The Nansemond Parkway Chess Club meets after school once per week in the school’s media center. The kids eat snacks while watching a chesskid.com tutorial on the projector. They then practice on computers using chesskid.com and on chess mats, following diagrams to learn how to properly arrange their chess pieces.

The Chess Club was formed for second- through fifth-graders at Nansemond Parkway shortly after Thanksgiving, according to Media Specialist Tosha Penkrot, and has become a fun activity for classmates, such as fourth-graders Neelima Kosuri and Jocelyn Collins, both 9 years old.

“It’s exciting, and I like to learn new moves with it, especially because I have my friends,” Neelima said as she played chess against Jocelyn on Wednesday.

Jocelyn said she likes “everything” about chess, including discovering new things, meeting new people and training for their first tournament. She described themselves as “chess masters in training.”

“Chess is a fun thing. You could do it as a hobby or a habit. It’s really fun, actually,” Jocelyn said.

According to Penkrot, the Hampton Roads Chess Association provided the school with a coach account on chesskid.com, as well as 10 chess mats. The school purchased an additional five chess mats from the HRCA at a reduced rate, and is also paying HRCA to provide a professional coach for the next three weeks.

Penkrot wrote in an email Friday that the club started after HRCA contacted Suffolk Public Schools to see if any of the schools were interested in forming chess clubs.

“I mentioned it to my husband, and he thought it would be something fun we could do together,” Penkrot wrote.

Her husband, Michael Penkrot, coaches the Chess Club members each week, along with fellow volunteer Dwight Jefferson, who is married to NPES first-grade teacher Zachelle Jefferson.

“Based on three adult volunteers, we decided on about 20 students, but I didn’t have the heart to turn so many children away so we upped it to 28 (students),” Tosha Penkrot wrote. Each student paid $20 to join the Chess Club for the cost of expenses, which has also been supported through donations.

The two volunteer coaches bring many years of experience to the Nansemond Parkway Chess Club. Jefferson first started playing around 1975, and Penkrot first played at age 8, followed by competitive play in high school.

According to Jefferson, the beauty of chess is that it teaches the children both discipline and control.

“You have to have discipline and control, or you’ll never win a game,” he said.

Second-graders Holden Mathes and Kenley Tordoff, both 7 years old, were playing against each other at the Wednesday meetup this week. Both young students agreed that chess takes lots of concentration, especially when you’re learning new moves.

But they’re learning from their mistakes and using those lessons to put their opponents in checkmate.

“It’s just a really fun experience to learn,” Kenley said as she played a game with Holden. “I just like learning new things.”

According to Michael Penkrot, chess is a good game for young children to learn because it builds useful problem-solving skills.

“It’s not about just looking at the move in front of you, but (also) the consequences of the move that you’re about to make,” he said. “It’s about decision-making and problem-solving and trying to get out of situations, and I think that helps a lot. It’s organization, too, because there’s a lot of thought process that goes into playing chess.”

The students will put their skills to the test when they compete for the first time at the Seven Cities School Chess Championship, which will be held April 4 in Norfolk, at the Academy for Discovery at Lakewood.

According to Tosha Penkrot, morale is high for her aspiring chess players.

“They’re very excited, and all I want them to do is to have fun,” she said, while also learning competition etiquette and other valuable lessons.

The children at the Wednesday practice session this week were very enthusiastic about playing chess. They had fun with their friends as they tried to figure out the best possible moves.

Meanwhile, the volunteer coaches are impressed by how much their young students are enjoying the game.

“I think they’re really enjoying it,” Jefferson said. “Some a little better than others, some learn a little quicker than others, but they’re all enthusiastic about it.”

“For second- through fifth-graders, (at) such a young age, they’re really excited about it,” Michael Penkrot said.

The students are learning that chess is a fun game, and that it’s not just for “elders,” according to Jocelyn.

“I’m 9 years old and I’m playing chess,” Jocelyn said. “Half the people here are in second, fourth and fifth grade. Chess can be for any ages.”