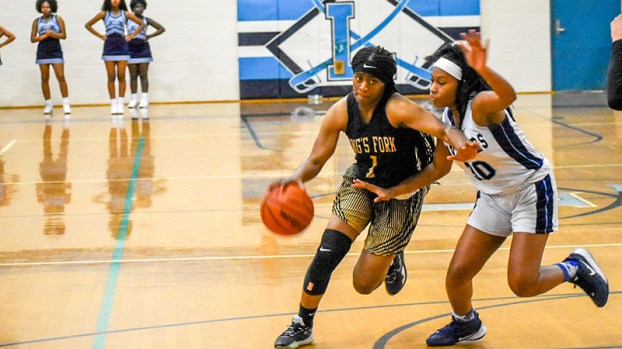 Amileon Pierce goes to the basket. The Lady Bulldogs will have the No. 6 seed in Class 4A region.

As the region playoffs start up, the Lady Bulldogs girls’ basketball team will be in an unfamiliar position.

In the past few years, the King’s Fork High School girls’ basketball team has been among the premier teams in the state. They’ve had multiple region championship games and state tournament appearances and are only two seasons removed from the school’s first state championship game appearance.

This year’s King’s Fork team has a different look to it. They are young and exuberant, with only one senior on their roster. Many thought coming into this season that the Lady Bulldogs didn’t have a chance to do anything of note this season, with so much they had lost from last season’s team and beyond. However, the Lady Bulldogs put together an impressive 16-6 record and will be underdogs throughout the playoffs, something they hadn’t been in recent years.

Coach Maurice Fofana sees it as an exciting opportunity.

“I’m excited to go in as an underdog, and we’ll see what happens from there,” Fofana said. “It’s no pressure on the kids. If we lose, then we weren’t supposed to win, and if we win, it’d be considered an upset for us going forward.”

King’s Fork holds the No. 6 seed in the region, and with the way the Lady Bulldogs have been playing as of late, they can make it tough for the teams ahead of them. They have won 11 of their last 12 games, and Fofana sees the team continuing to grow and get better every time they step on the floor.

“This team has grown and matured overnight,” Fofana said. “I’ve seen some great things from these kids and with us only having one senior, the sky is the limit for what we will be able to do going forward.”

King’s Fork will face Warhill High School at 6 p.m. Tuesday at York High School. If they Lady Bulldogs win, they play again Thursday with opponent and location to be determined.

The Lakeland High School girls’ basketball team will head into the playoffs with the No. 3 seed in the region.... read more