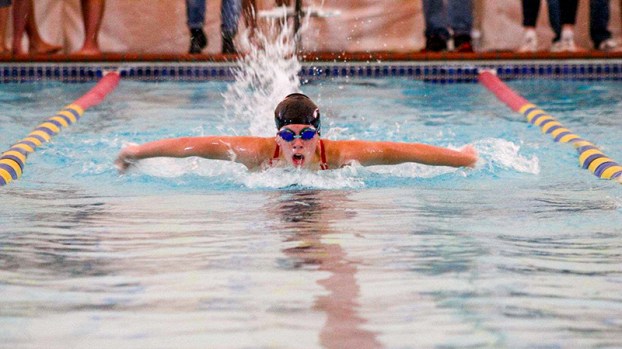 Ashlyn Swaim was voted Suffolk News-Herald Player of the Week after swimming school record times in the Class 5A region meet for Nansemond River High School.

The Nansemond River swim season has been filled with impressive performances on both the boys’ and girls’ side throughout the season.

Swaim, a sophomore, is among the standout swimmers on the team and continued to show why in the region meet for Nansemond River. During the meet, Swaim broke the school record for the 100 butterfly event and was a part of two relay teams that qualified for states and also broke school records.

“I felt really good diving in and knew it was good to be a good race,” Swaim said. “For the relays, and being a part of a team, you have to give it your all and leave it all in the pool, and that’s what I did.”

Swaim felt going into the region meet that Nansemond River had a chance to do something special. The team had worked hard all season, and she felt like they had a good chance of breaking records. The Nansemond River sophomore has had an adversity-driven year. She suffered a shoulder injury back in September, and she was able to come back in December stronger and  have one of her best seasons.

“Coming back from injury has been difficult, but I’ve come back stronger,” Swaim said. “It’s been great to be doing so well. This is, by far, one of my best seasons. Having that injury definitely changed my perspective of swimming and taught me not to take my talent for granted.”

A goal Swaim wanted to accomplish this season was to get the school record for the 100 fly, and she was able to do it. She admitted to being surprised she did it. She described the moment of getting out of the pool and seeing that she had broken a record as a proud feeling.

Swaim is motivated by knowing that her team is counting on her and that they are always there for her.

“It makes me proud knowing all of my hard work has paid off,” Swaim said. “Getting out of the pool and seeing how we did just brings a sense of joy to the whole team.”

Swaim is a year-round swimmer and, as just a sophomore, has the potential for an even bigger junior season and beyond.