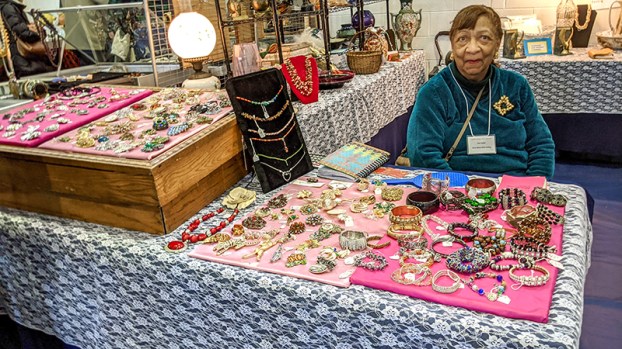 Ann Taylor of Hampton said she and her husband, Matt Taylor, enjoy coming to the Suffolk Art League’s Antiques Show and Sale as a way to reconnect with old friends while selling their wares.

From first-timers to long-timers, vendors at the Suffolk Art League’s 37th Annual Antiques Show and Sale at King’s Fork Middle School over the weekend praised the event as a way to connect with new customers and old friends.

Donald Massey was participating in the event for the first time. As the owner of Donald Massey Coins and Stamps in Suffolk, it features items rooted in his love of history. He has participated in other coin and Civil War shows.

As people walked up to look at his items on display, he would pull one of them out and explain its background. He had sold some coins, jewelry, antiques and glass over the first few hours of the event.

Odile Baderspach was also at the show for the first time. She opened her new business, The French Corner, in December, and by June will relocate it from 126 Main St. to 133 Bank St.

Her shop features curated French antiques and products sourced directly from France, and she had some of those items on display at the show.

“I pick everything myself,” Baderspach said. “When I’m in France, I just choose things so I know where it comes from, the story of each thing. I think it’s important.”

On the other hand, Ann and Matt Taylor of Hampton, who own Once More with Feeling, are veterans of the show, and they travel to display their items at other shows also.

“It’s small enough that you get to know your customers,” Ann Taylor said. “People are friendly. It’s just a wonderful atmosphere. It really is. The art people are great to deal with. It’s all been terrific.”

The couple, who have been married 55 years, each have different interests that feed into the items they had on display. While she has curated such things as jewelry, ceramics and pottery to sell, he has toys. He started collecting and eventually got her hooked.

“He began a collection of Western toys, and other toys, and he had a room. And then it began to come out of the room and into the hallway, at which point I said, ‘Oh, no, no, no,’” Ann Taylor said, laughing.

Both retired now — he worked for Eastman Kodak, while she was a teacher — Matt Taylor began doing shows in Richmond and invited her to tag along and sit at the booth, where she began to learn about his customers. He hooked her into it by telling her she could bring jewelry to sell.

“I started out in kids’ Westerns, and then after a few shows, she had about three-quarters of the booth,” Matt Taylor said. His wife shook her head, laughing, before he added about their partnership, “You can’t just do one thing. It works real well.”

Hundreds filled the middle school over the course of the two-day show, which featured 38 antiques, collectibles and vintage dealers from around the Mid-Atlantic region. It’s the biggest fundraiser of the year for the Suffolk Art League.

Massey believes the big draw is in the show’s variety.

Residents across Suffolk enjoyed the snowfall that fell Thursday and early Friday by building snowmen, sledding and engaging in all... read more