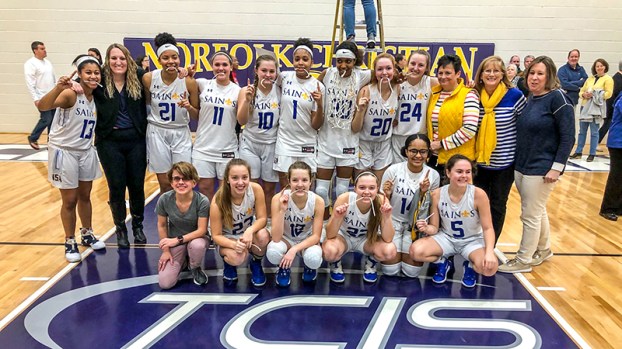 After winning the TCIS conference tournament, the Lady Saints hold the No. 1 seed for the state tournament. (submitted photo)

The Nansemond-Suffolk Academy girls’ basketball team is preparing for the state tournament holding the top seed.

The Lady Saints are on tap to be the favorites as they head into the Virginia Independent Schools Athletic Association Division II state tournament. NSA has the top seed and is playing at a very high level right now as a group.

NSA is 21-4 on the season and recently earned another conference tournament championship over the weekend, as they took down Steward School. As the season continues to get higher-stakes, Coach Kim Aston knows NSA is capable of doing some good things.

“Coming into that conference tournament we knew the pressure was on us if we wanted to secure that No. 1 seed,” Aston said. “Considering all that was at stake, I feel like the girls really came through.”

Last season, the Lady Saints advanced as far as the state semifinals before being knocked off by Steward. This season, NSA came in with a lot of expectations after returning a group that played so well last season, and the Lady Saints have lived up to it. Three wins can earn them another state title, and Aston believes if NSA can just stick to what they have been doing up to this point in the season, they should be fine.

“We feel like this year, in comparison to some other years, we’ve stuck to what we do well more so than adapting our game plan to someone else,” Aston said. “So, heading into the state tournament, we want to keep doing what we have been doing as much as we can.”

Regardless of the outcome this week, the Lady Saints still remain a young team. Also, with the depth the Lady Saints have on the bench this season, Aston feels it’s one of the deepest she has been able to coach, and that should bode well for the Lady Saints in the playoffs.

NSA will host the winner between Trinity Christian School and Oakcrest School at 5:30 p.m. Wednesday. If NSA wins, they will play in the semifinals at Richard Bland College Friday and then the championship game at the same site Saturday.

For the second straight year, the Nansemond River High School wrestling team finished as the runner-up in the Class 5... read more