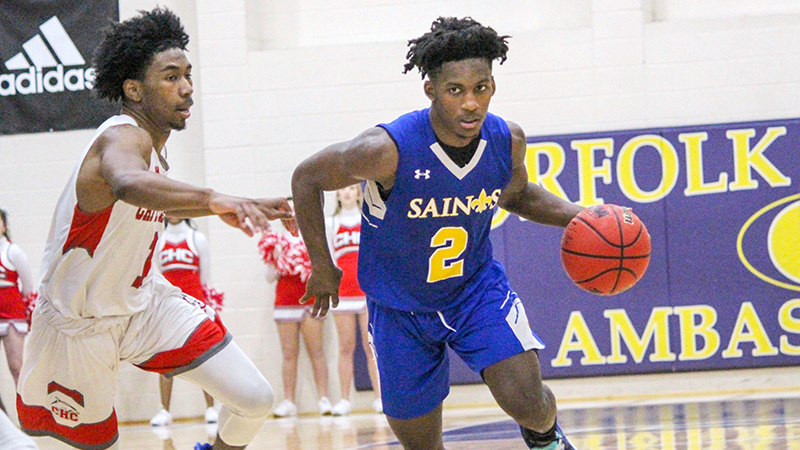 George Pettaway makes a drive for the Saints during Nansemond-Suffolk Academy’s 60-49 loss to Cape Henry in the TCIS semifinals on Friday.

The Nansemond-Suffolk Academy Saints faced one of the top teams in all of Hampton Roads on Friday night during the Tidewater Conference of Independent Schools Tournament semifinals at Norfolk Christian. Their opponent, top-seeded and regular-season title winner Cape Henry, posed quite a test with a trio of Division I prospects in their starting lineup in Christian Moore, Bryson Spell and Greg Melvin — all of whom contributed to a hard-fought 59-51 win at home over the Saints back on Jan. 30.

In the rematch, NSA jumped out to a 6-5 lead but played from behind most of the night and couldn’t quite make a run to overtake the potent Dolphins, falling 60-49.

“For us, the story typically is how many shots are we going to make? According to our stats, we shot 33 percent, and it’s pretty tough to win against a good team when we shoot that low,” noted NSA Coach Chris Fuhrmann, who’s in his second season at the helm.

An injury early in the season to Jaden Freeman, one of the top scorers for the Saints a year ago, made it even more challenging for Nansemond-Suffolk to match up with a team of Cape Henry’s caliber. They’ve leaned heavily on a trio of freshmen in their playing rotation. The one that stood out against the Dolphins was guard Kaleb Brown, who bunched 11 of his team-high 19 points in the third quarter. The Saints pulled within four at 35-31 on his lone three-point make of the evening.

“I told Kaleb before the year ‘don’t be afraid to step up.’ Lo and behold when Jaden went out early in the year, he has to step up,” Fuhrmann commented.

“We’re used to him doing things like he did in the third quarter. Unfortunately, he wasn’t as consistent shooting the ball. He’s had a couple of games where he made seven 3’s. But he’s only a freshman, which is hard to imagine sometimes, because he definitely doesn’t look like one out there.”

On the night, NSA shot 4-of-24 behind the three-point line. While Grant Lopez buried a pair of those in the fourth quarter, it proved to be a bit too late, as Cape Henry had already built a double-digit lead at that point. The Dolphins out-rebounded NSA 40-27, and fourth-leading scorer C.J. Bailey erupted for 21 points, including three makes from long distance.

“We did a good job on a couple of their main players in Christian and Bryson. The last time we played them, Christian had five 3’s and scored in the upper 20s. We really keyed in on him. This time he only had six points, and Bryson only had seven. The Bailey kid really stepped up for them and hit some big shots. It really becomes pick your poison,” Fuhrmann remarked.

“It would’ve been nice to see a couple more shots fall and see what would’ve happened if we got within one or two with a few minutes to go in the game to give us an opportunity to get over that hump,” he continued. “But it’s tough to go down and keep playing defense when you see shot after shot not go in the basket.”

Now 18-8 overall, the Saints look to re-group when they play host to Metro Conference Tournament Champion Atlantic Shores on Tuesday night in the opening round of the Virginia Independent Schools Athletic Association Division II state playoffs.

A win would result in a trip to top-seeded Blue Ridge, the defending state champ, on Feb. 26.

“Our motto is when we play our best we really feel like we have a chance to beat anybody. I know that’s a cliché, but when we are putting the ball in a basket at a high clip, we’re pretty good,” Fuhrmann stated.

“Even though we’re a little undersized, our defense has been really good this year with our zone and switching some man-to-man. We’re just going to try to continue to work on our execution in the half-court to get as good of a shot as we can. Hopefully we can get everybody on the same page, put together a couple good performances and see what happens.”