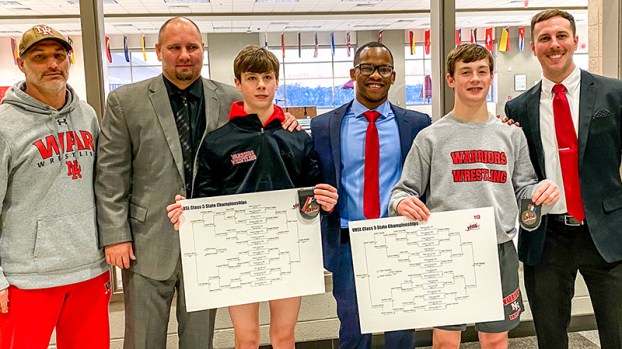 The Nansemond River High School wrestling standouts Owen and Evans Rawls both come up big for Warriors at state tournament.

After competing in the Class 5 state tournament last weekend, the Rawls brothers have cemented themselves in school history. They became the first siblings to earn state championships in the same year. Owen took the state title at 106 and Evan took the title at 113.

This didn’t happen by mistake, as the brothers had been preparing each other all season to take advantage of the opportunity they’d have to bring state titles back to the same household. They had been wrestling partners at practice throughout the season, so each was able to see the growth in each other every single day at home and at practice. There was always brotherly competition, and at times it got heated, but they knew it was all in the name of pushing one another toward greatness.

Owen, the youngest of the two, was able to make an immediate impact for the Warriors as a freshman while Evan, a junior, has been able to have an unforgettable season. Owen wrestled before Evan at the state tournament, so Evan was able to see his younger brother win a title. He didn’t deny there was some pressure to equal his brother’s accomplishment.

“It was cool being able to win the finals back to back,” Evan said. “Of course, both of us wanted to go in and either be better than the other or just as good.”

“It’s been on my mind since I started this year,” Owen said of he and his brother winning titles. “It’s a great achievement, and it’s cool to be a part of school history.”

Warriors coach James “Tripp” Seed was in their corners for each of their wins and was more than excited to see the Owens brothers compete the way they did.

“That was a cool experience to be in the corners for both of those guys,” Seed said. “Those guys practice with each other every day, so they push each other. Owen dominated his guy, and Evan was able to go out there and feed off of that. It was just something that was really cool to see.”

Both brothers return next season with the goal of building on this season. Both finished the postseason with a total of two region championships and two state titles.

“All year, we pushed each other past that mental barrier that told us to stop when it got tough,” Owen said. “I feel like that made my wrestling phenomenally better this year.”

“We just want to continue to push each other to achieve more of our goals,” Evan said. “Doing that, I think we can achieve great things in wrestling and life.”

By Matthew Hatfield Correspondent The Nansemond-Suffolk Academy Saints faced one of the top teams in all of Hampton Roads on... read more