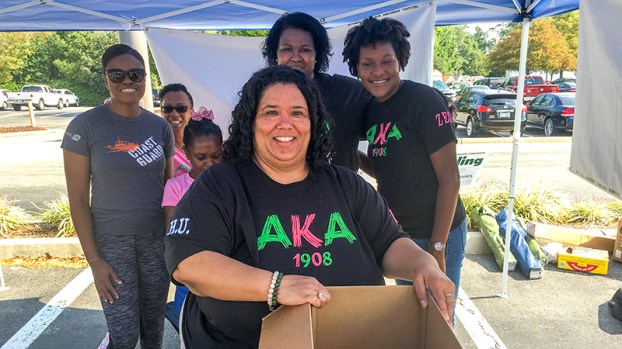 Jennifer Ledbetter-Phillips, front, the “Acts of Green” chairperson for the Zeta Epsilon Omega Chapter of Alpha Kappa Alpha Sorority, Inc., volunteers at a tire recycling event held by Keep Suffolk Beautiful. Pictured with her are other chapter members and volunteers. (submitted photo)

Editor’s Note: The Featured Volunteer is a new feature that will run every other week in the Suffolk News-Herald. To suggest a volunteer you love, email news@suffolknewsherald.com.

Keep Suffolk Beautiful is grateful for the many volunteers that participate in its recycling drives and tire amnesty events, and one of those dedicated volunteers is Jennifer Ledbetter-Phillips.

Ledbetter-Phillips is a longtime Suffolk resident, a Suffolk Public Schools teacher and the “Acts of Green” chairperson for the Zeta Epsilon Omega Chapter of Alpha Kappa Alpha Sorority Inc.

The sorority has been in partnership with the Suffolk Clean Community Commission for at least five years, according to Ledbetter-Phillips. The SCCC is an affiliate of Keep America Beautiful.

But her involvement with the SCCC goes back even further because of her late mother, Evelyn F. Ledbetter.

“She served as one of its commissioners and recruited me, along with my husband, my children and anybody else she could get involved,” Ledbetter-Phillips wrote in an email Tuesday.

Volunteers collect food bank donations of non-perishable items, along with baby food, diapers and wipes. They also assist in directing traffic, stacking tires, shredding, and in collecting items for Goodwill and glasses for the Lions Club.

“Jennifer is great to work with and most importantly extremely reliable,” Wayne Jones, City of Suffolk litter control coordinator, wrote in an email Tuesday. “She has been volunteering at our recycling drives for years and she always recruits many more people from her sorority … to come and support the event.”

She said that volunteerism is in her blood, starting with her parents, who set an example through their involvement at church and in the community. She’s tried to instill the same importance of volunteerism in her children, who she hopes will pass that same lesson on to their own children and so forth.

“I think it is important for people to volunteer in Suffolk, because everyone benefits,” she said. “We are preserving our resources through networking, and we are working together to meet the needs of the community in which we live.”

Her volunteerism has set an example for others and has impressed Keep Suffolk Beautiful members.

“We never have to worry about being shorthanded, because we know Jennifer will be there,” Jones wrote in an email. “She is a wonderful volunteer.”

Young entrepreneurs get chance to shine

Chauncy Jones has been surprised to see his daughter, Chaniya LaShai, take to being an entrepreneur. But the 10-year-old Northern... read more