Consistency is key for Lopez 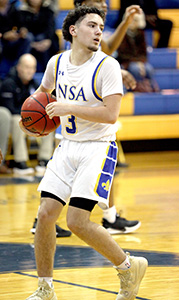 Grant Lopez was voted Suffolk News-Herald Player of the Week.

Grant Lopez was voted Suffolk News-Herald Player of the Week after scoring 19 points, which included five three-pointers in a Saints win.

Shooting is a skill that is crafted by a lot of repetition and hard work as a basketball player. It is easy to shoot, but it takes a lot of work to be a strong shooter, and that’s something Nansemond-Suffolk Academy junior Grant Lopez has been able to demonstrate this season. In a win in the conference tournament against Norfolk Christian, Grant scored 19 points, with 15 of them coming from beyond the three-point line. Lopez felt good about his performance and gave credit to his teammates for helping him get going.

“I felt like I played well,” Lopez said. “My teammates were able to find me when I was open, and I knocked down a good number of those shots.”

Lopez has been solid from beyond the arc all season long for the Saints. He has had multiple games where he has hit at least two three-pointers in a game, and he even hit a game-winner this season for the Saints in a matchup against Williamsburg Christian.

The junior credits it all to the hard work he put in during the previous summer, which prepared him for this year.

“I felt the season went well for me this year,” he said. “I consistently shot the ball at a high rate and was able to help the team get some big wins. The hard work from the offseason really paid off.”

As he approached his junior season, Lopez made his goal consistency. He wanted to be a reliable teammate — someone his teammates and coaches could trust — and he was able to do that this season. He is motivated by winning and sees it as a blessing to be able to play with the team he had this season.

“The guys knew the work I put in during the offseason,” Lopez said. “Even if I missed a few, they’d keep telling me to keep shooting, and they’d keep finding me when I was open.”

Lopez watches a lot of basketball, taking different things from different players. A couple of players he likes to watch are the Phoenix Suns’ Devin Booker and the Boston Celtics’ Carsen Edwards. Both of them doing a good job getting open and shooting the ball well, and that’s something Lopez admires.

As Lopez prepares for his senior season during the offseason, he looks to build on his foundation he has laid as a junior, which could be a sign of good things to come for NSA basketball. He draws inspiration from his family, which helps him in his work ethic on and off the court.