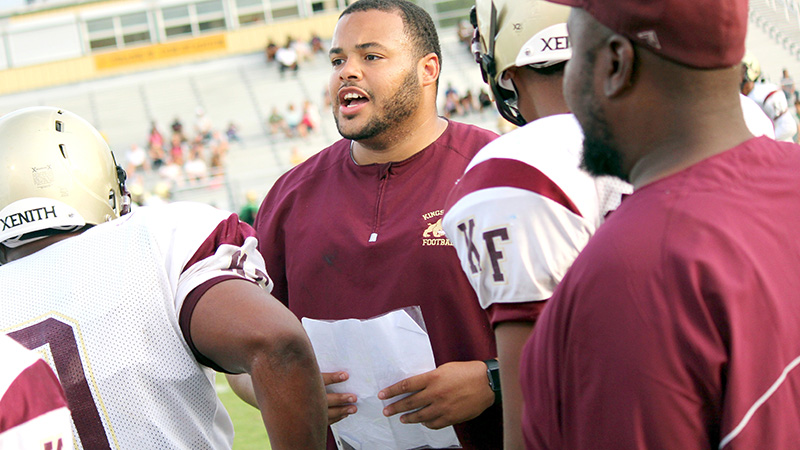 The King’s Fork Bulldogs have hired a new head football coach who’s no stranger to Suffolk.

Prior to last year, Joffrion served as an assistant coach and defensive coordinator at King’s Fork, helping the Bulldogs to an 11-2 mark and trip to the Region 4A Championship game in 2017 when they were under the direction of Scottie Littles.

“A lot of these kids I’ve coached since they were in middle school. Once we get started with workouts, I will know the kids, the community, the parents, so it makes for an easy transition,” Joffrion stated.

“They were there when we had a lot of success — many of them in eighth grade — when we beat Oscar Smith to win a share of the district in 2017. It was huge for them to see that, and I would love to get us to that point where we are competing for a district title every single year.”

Joffrion also was a standout player, beginning at Ocean Lakes High School in Virginia Beach and then at the college level at Chowan University, where his 14 sacks placed him fifth all-time in program history and earned All-American honors. Several people in the coaching profession have provided inspiration along his football journey.

“Chris Scott is a very organized, hard worker who expects a lot from his coaches and even more from his players. It was amazing to be a fly on the wall and learn so much from him. Seeing how Scottie handled himself as a young head coach and winning the district very young was also really influential to me,” Joffrion said.

“Pete Gale invested a lot into me as a young coach. To be honest with you, Tommy Austin changed my life in college and is a great mentor for me. I wouldn’t be in the situation I am today without those people investing in me, and I’m extremely thankful.”

Coach Joffrion earned his Master of Education from Liberty University in 2018 and his Bachelor of Arts from Chowan in 2016. He is currently enrolled in a doctorate program for educational leadership at Liberty University, and in the classroom was a special education teacher at Oscar Smith.

“My first order of business is to let the kids know that I love them. At the end of the day, they have to know that we’re going to be tough on them, but we love them and will do everything we can for them. I want that to be clear. We have to build that trust, and it’s important we surround them with the best coaches we can that will not only love them, but coach them up hard,” Joffrion said.

“The wins will come if you do those things. When adversity hits or things aren’t going our way, how are we going to respond? That’s something you’ll hear me yell a lot at practice, because we just play a simple game of football. When something doesn’t go right in life, how are you going to respond as a husband, a father and when people are truly looking up to you? I feel like football is a great tool for teaching some of those life lessons to these young men.”

Joffrion is ready to get the Bulldogs back to competing with the premier programs in the Southeastern District. Taking care of priorities off the field will be just as critical to them as winning on the gridiron.

“Coach Scott had that 1-0 mindset when I was in high school, and I’ve carried that on with me. Go 1-0 in everything you do,” Joffrion said. “I’m trying to change these kids’ lives. At the end of the day, we have to understand what we’re trying to accomplish.”

Consistency is key for Lopez