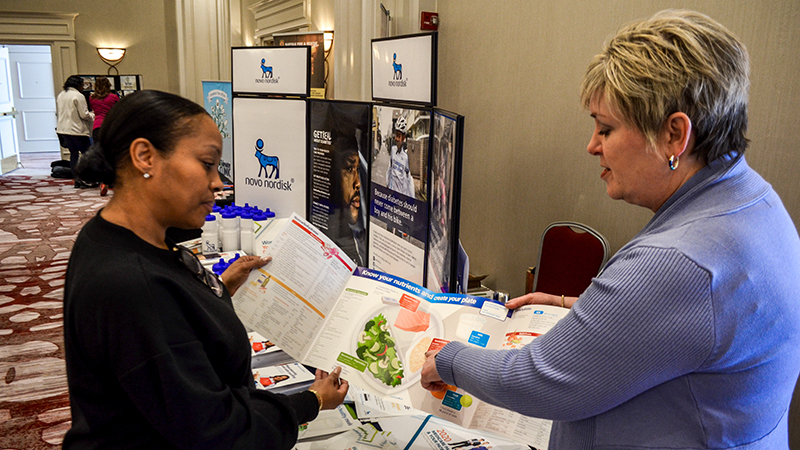 Dozens of people attended the community health fair that was presented downtown on Saturday by the Suffolk Alumnae Chapter of Delta Sigma Theta Sorority Inc. and the Hilton Garden Inn Suffolk Riverfront.

This health fair was one of the Suffolk Alumnae Chapter’s programs for physical and mental health, and offered free services to attendees while also highlighting a variety of different vendors from the community.

“The importance of the event is that we get an opportunity to help empower the community,” Suffolk Alumnae Chapter President Tina Paul said, “and educate them in regards to living healthier lives physically, as well as mentally.”

One of the attendees on Saturday morning was David Jordan, who there with his niece, Alexis Jordan, a member of the sorority. David Jordan is a prostate cancer survivor, and he advised people to be serious about their health and to be consistent with their appointments.

“They need to go and get checked, and go to their doctors on a regular basis, so they can catch it before it will be too late.” Jordan said.

Marlo Carter was visiting the area from out of town with family. She stayed at the Hilton Garden Inn for the weekend and noticed the health fair in the downstairs ballroom.

She was recently diagnosed with pre-diabetes and wanted to find any information that may help her going forward.

“I think it’s a good event,” Carter said. “More people need to come out, to be aware of what’s going on with their health.”

Carter received help from Margaret Bachand, a dietitian and diabetes educator for Novo Nordisk.  Bachand talked to her and other attendees about taking control of their diabetes through lifestyle management, from meal planning and portion sizes to being more physically active.

Bachand said that she spoke to some older attendees on Saturday who weren’t given healthy eating tips when they were younger, which led to unhealthy eating habits, starting at a young age.

“That’s why we need to tell our children and our grandchildren that this is the way they should be eating, so somebody doesn’t have to tell them later in life,” Bachand said. “We can start our kids off eating better, exercising more and taking better care of themselves.”

Pharnethia Jackson, the Suffolk Alumnae Chapter chair of physical and mental health and coordinator for the health fair, said they received a positive response on Saturday from the community.

“I think they’ve welcomed us having the health fair, and they’ve been excited about having us here,” Jackson said. “So far everyone has been gracious and thought it was a good event.”

There were more than 35 vendors that participated in the community health fair on Saturday, according to a Feb. 26 email from Sharon Slaughter, media relations chair for the Suffolk Alumnae Chapter.

The Suffolk chapter hope to partner with more vendors and local businesses for their health fair next year, Jackson said.

“I want to thank all of the supporters,” Paul said, “the volunteers that have come out today, whether they were medical professionals or otherwise, for just coming and volunteering their free services.”

“We would also like thank the Hilton, who donated the entire ball room free of charge for the entire event,” Jackson added.