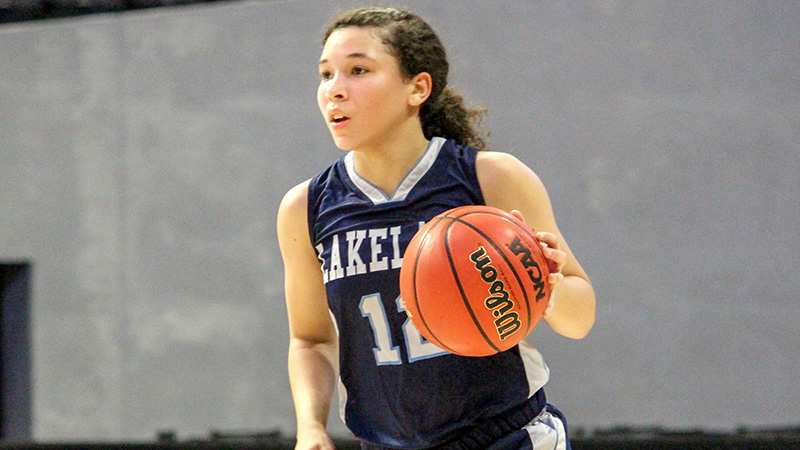 Jaelyn Brown looks for an opening during last Saturday’s win against Park View High School. The Lady Cavaliers are advancing to the state tournament for the first time in history. (Matthew Hatfield Photo)

Never before had the Lakeland girls’ basketball team reached the state tournament. That is, until the final Saturday of February 2020, when the third-seeded Lady Cavaliers jumped out to a nine-point lead only a few minutes into their regional semifinal matchup with second-seeded Park View from South Hill.

From there, Lakeland’s ladies never looked back in rolling to a 76-45 win that exemplified their teamwork and progress in every facet of the game. One would never have been able to tell it was their first time playing at the historic Norfolk Scope arena with a group of neophytes.

“We were hot for the opportunity,” said Daryl Rountree, Lakeland’s third-year head girls’ basketball coach. “They shot the ball extremely well. I’m so proud of them to make this history-making moment.”

Lakeland made five three-pointers in the game’s opening quarter, two by Jamauri Demiel. She finished with a game-best 19 points, including 5-of-9 behind the arc, to go with five steals.

“Honestly, we got in our zone, listened to our music and Coach Rountree reminded us over and over to play how we play,” Demiel said. “Don’t let anything distract us. It’s just a gym.”

Park View never found its footing until it was way too late, as the Lakeland girls took down a team that entered at 20-6 overall with its sights also set on qualifying for the state playoffs. Facing teams at the Class 6 and Class 5 level, along with Suffolk rival King’s Fork, helped them get prepared for the moment.

“Night in and night out in the Southeastern District, it’s tough competition,” Rountree pointed out. “That got us battle-tested and made us ready for games like this one.”

The unselfishness of the Lakeland girls was on full display as the team had 22 assists — from eight different players — on 28 made field goals.

“That’s been all year,” Rountree said. “We always share the ball because they know everybody on this team can finish.”

It’s a team full of sophomores and freshmen for Lakeland. Some are stunned to see them get this far. Park View was probably even surprised at how well Lakeland plays. Their defense had no answer for Demiel.

“She was excited about being her and didn’t want it to end,” Rountree said. “She stepped up and made some big shots for us.”

In addition to Demiel, the Lady Cavs received 13 points, five assists and five steals from Kianna Gray. Jaelyn Brown chipped in 10 points, and so did reserve Janajah Artis.

“I knew coming in that they could be great, but they exceeded my expectations,” Rountree said. “They went to another level, and I’m pleasantly surprised.”

“That’s our bread and butter,” Rountree said. “We’re going to play hard defensively, pressure you and if you can’t handle the ball, we’re going to make you turn it over and make it easy for us. I had seen (Park View) play about two weeks ago, and I knew that it would be hard for them to keep up with us with our guards.”

Rountree can’t wait for the future of his team as they get ready to compete in the VHSL Class 3 State Tournament that’ll begin on Friday.

“This was big for our group,” Rountree said. “They’re so young, but this gives them so much confidence along with the motivation to get better and go further as a team.”

Before competing in the state playoffs, Lakeland will take on Booker T. Washington, a surprise state tournament entrant to some, as the fifth-seeded Bookers took down top-seeded Hopewell at the Scope on Tuesday night. But Rountree isn’t all that surprised.

“I knew Booker T. was a great team, and my expectation was that they would beat Hopewell,” he said. “I think it’s going to be a great game. We’re looking forward to the opportunity to play for a regional championship.”

Even with a roster that doesn’t feature any seniors or juniors, the Lady Cavs are anxious to continue making history on their quest for a state title.

“It’s amazing. No words can describe this feeling … it’s crazy,” Demiel said. “I feel like we are setting that change and the turning point for Lakeland girls’ basketball. Putting a banner on the wall is one of our main goals, so getting that chance is great.”