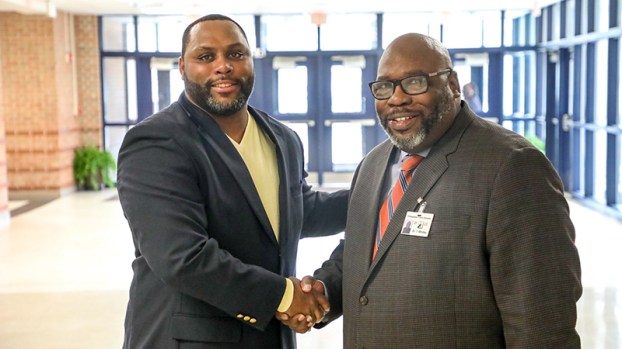 Cook, a 1998 graduate of Western Branch High School, has spent the last four years as head football coach at H.H. Poole Middle School in Stafford, which team earned the title of Stafford County Public Schools football champions in 2016. Besides earning championship status in Stafford County, 25 of the middle school team’s players had a GPA of 3.0 or higher.

Prior to that, Cook filled various rolls — associate head football coach at H.H. Poole Middle School and interim head coach and running back coach at Stafford High School. He conducted the conditioning and training activities of the football athletes while also serving as a health and physical education teacher for more than 11 years at the middle school. Cook began his teaching career at La Plata High School in Maryland, where he also filled positions as varsity and junior varsity special teams’ coordinator for the school.

“It’s exciting to come back home and have the opportunity to be a leader in the community,” said Cook. “I’m looking forward to watching my alma mater grow.”

While attending Western Branch High School, Cook was a member of the undefeated championship team in 1997, served as team captain, and was selected by WTKR News Channel 3 as the “Top Gun Athlete of the Week” in October of 1996. At Virginia State University, Cook again served as team captain, was a member of the All CIAA Conference Rookie Team at running back, was selected as a “Key Player” to watch by the HBCU Street & Smith: Black College Football Preview, and set a university record for longest punt in school history (77 yards).

Cook is relocating to Chesapeake with his wife, Lashaun Cook, and children Desmond, Derrick, Dailynn and Devin.

By Matthew Hatfield Correspondent The Lakeland Cavaliers have been building for the moment that came their way on the final... read more