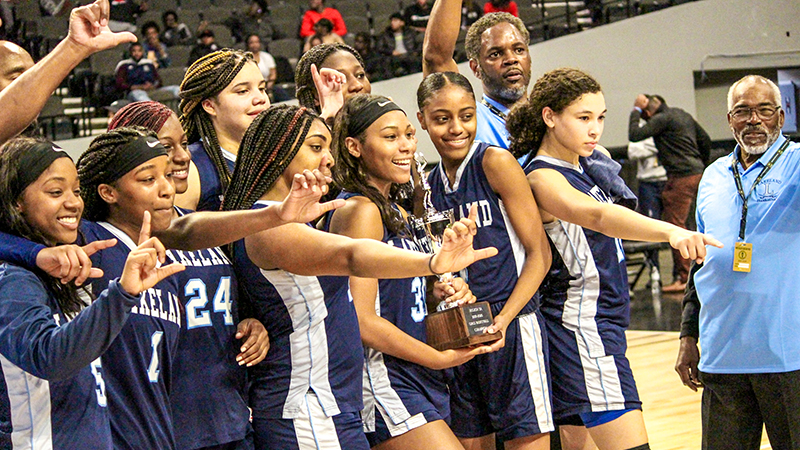 The Lakeland High School girls’ basketball team celebrates after winning the Region 3A championship at the Norfolk Scope on Tuesday.

The fountain of youth has been good to the Lakeland girls basketball team in 2019-20. Their roster, which doesn’t consist of a single senior or junior, has shown coming-of-age this season, and that continued on Tuesday night at the Norfolk Scope during the Region 3A Championship.

“It’s a wonderful feeling for our program the way we’ve battled all year and to win to pull off this regional title,” said Lakeland Coach Daryl Rountree.

By winning to move to 18-7 overall, the Lady Cavaliers continue their season of firsts. They followed up clinching their first state tournament berth with their first regional title in program history.

“It feels really good to know that we as a team can accomplish anything we set our minds to,” said Lakeland guard Ke’monye Canady, the game’s leading scorer with 18 points. “We played hard for this, and we needed this right here.”

Trailing 8-4 after a quarter of play, the Lakeland offense found its rhythm in the second quarter as they began to attack and get to the foul line more consistently. Jaelyn Brown was the top scorer through one half of play with five points, as the Lady Cavaliers nudged ahead of Booker T. Washington, 17-16 at intermission.

To open the second half, Lakeland went on a 17-4 run, looking much more like the team that was coming off of a season-high performance of 76 points in the regional semifinals against Park View of South Hill. That spurt to begin the half took them to 14 points ahead following four straight free-throws from Kianna Gray.

What triggered the turnaround? “Our defense,” Rountree replied. “We strive on defense because we’re quick. People forget, we’re still a team with seven sophomores and four freshmen, so we’re going to make mistakes. When we put our ball pressure on them, they turned the ball over a lot. We got them off course of what they usually do.”

Booker T. Washington clawed within seven at 45-38 with just under two minutes to play, but the Lady Cavs were able to salt it away at the free-throw line and by not allowing the opposition to score a basket in the game’s final three minutes.

“We packed it in tight and we pressured their guards to force them to shoot from the outside, which they’re not always very good at doing,” Rountree said, as the Lady Bookers struggled to make consecutive three-pointers the whole night.

Canady was the lone double-figure scorer for Lakeland, but her impact goes beyond the stat sheet, Rountree said.

“Ke’monye is the heart and soul of our defense and offense. She does all the little things that some people don’t realize,” he said. “Also, she’s a leader and has helped carry us a long way.

“Anybody can lead us in scoring on our team. Day in and day out, we tend to have different leading scorers. It was a great team effort.”

On deck for Lakeland is a matchup with Region 3B runner-up Brentsville District (19-6) in the VHSL State Tournament quarterfinals at 6 p.m. Friday at King’s Fork High School. Three more playoff victories will match Lakeland’s season-long win streak of seven games, when they began the campaign 7-0. It’ll also bring them another first in the form of the ultimate prize: a state championship.

“We’re going to celebrate this one,” Rountree said. “But then we’ll go in and prepare, try to put our best foot forward and try to make that run for the state title. It’s a great thing.”